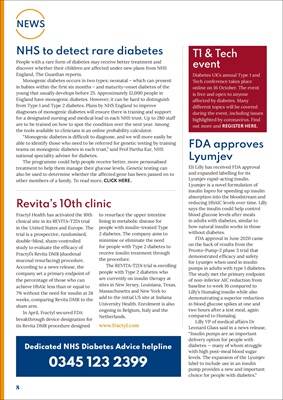 discover whether their children are affected under new plans from NHS

Monogenic diabetes occurs in two types: neonatal - which can present

young that usually develops before 25. Approximately 12,000 people in

England have monogenic diabetes. However, it can be hard to distinguish

from Type 1 and Type 2 diabetes. Plans by NHS England to improve

diagnoses of monogenic diabetes will ensure there is training and support

for a designated nursing and medical lead in each NHS trust. Up to 280 staff

are to be trained on how to spot the condition over the next year. Among

the tools available to clinicians is an online probability calculator.

"Monogenic diabetes is difficult to diagnose, and we will more easily be

treatment to help them manage their glucose levels. Genetic testing can

other members of a family. To read more, CLICK HERE.

and expanded labelling for its

Lyumjev is a novel formulation of

insulin lispro for speeding up insulin

absorption into the bloodstream and

says the insulin could help control

in adults with diabetes, similar to

how natural insulin works in those

on the back of results from the

for Lyumjev when used in insulin

pumps in adults with type 1 diabetes.

The study met the primary endpoint

of non-inferior A1C reduction from

baseline to week 16 compared to

in blood glucose spikes at one and

"Insulin pumps are an important

delivery option for people with

diabetes - many of whom struggle

levels. The expansion of the Lyumjev

label to include use in an insulin

pump provides a new and important

choice for people with diabetes."

online on 16 October. The event

is free and open to anyone

affected by diabetes. Many

different topics will be covered

during the event, including issues

out more and REGISTER HERE.

Fractyl Health has activated the 10th

clinical site in its REVITA-T2Di trial

in the United States and Europe. The

trial is a prospective, randomised,

study to evaluate the efficacy of

According to a news release, the

company set a primary endpoint of

the percentage of those who can

achieve HbA1c less than or equal to

7% without the need for insulin at 24

weeks, comparing Revita DMR to the

to resurface the upper intestine

lining in metabolic disease for

2 diabetes. The company aims to

minimise or eliminate the need

for people with Type 2 diabetes to

The REVITA-T2Di trial is enrolling

people with Type 2 diabetes who

are currently on insulin therapy at

Massachusetts and New York to

add to the initial US site at Indiana

ongoing in Belgium, Italy and the