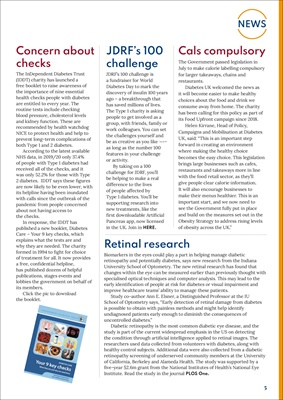 retinopathy and potentially diabetes, says new research from the Indiana

University School of Optometry. The new retinal research has found that

specialised optical techniques and computer analysis. This may lead to the

is possible to obtain with painless methods and might help identify

undiagnosed patients early enough to diminish the consequences of

Diabetic retinopathy is the most common diabetic eye disease, and the

the condition through artificial intelligence applied to retinal images. The

researchers used data collected from volunteers with diabetes, along with

retinopathy screening of underserved community members at the University

of California, Berkeley and Alameda Health. The study was supported by a

Institute. Read the study in the journal PLOS One.

(IDDT) charity has launched a

free booklet to raise awareness of

the importance of nine essential

are entitled to every year. The

and kidney function. These are

NICE to protect health and help to

both Type 1 and 2 diabetes.

According to the latest available

of people with Type 1 diabetes had

received all of the checks, and it

are now likely to be even lower, with

its helpline having been inundated

with calls since the outbreak of the

In response, the IDDT has

Care - Your 9 key checks, which

explains what the tests are and

why they are needed. The charity

formed in 1994 to fight for choice

of treatment for all. It now provides

has published dozens of helpful

lobbies the government on behalf of

a fundraiser for World

Diabetes Day to mark the

ago - a breakthrough that

has saved millions of lives.

The Type 1 charity is asking

people to get involved as a

group, with friends, family or

work colleagues. You can set

the challenges yourself and

features in your challenge

be helping to make a real

difference to the lives

of people affected by

in the UK. Join in HERE.

The Government passed legislation in

for larger takeaways, chains and

Diabetes UK welcomed the news as

it will become easier to make healthy

choices about the food and drink we

consume away from home. The charity

has been calling for this policy as part of

its Food Upfront campaign since 2018.

Campaigns and Mobilisation at Diabetes

UK, said: "This is an important step

forward in creating an environment

where making the healthy choice

becomes the easy choice. This legislation

brings large businesses such as cafes,

restaurants and takeaways more in line

with the food retail sector, as they'll

It will also encourage businesses to

make their menus healthier. This is an

important start, and we now need to

and build on the measures set out in the

of obesity across the UK."