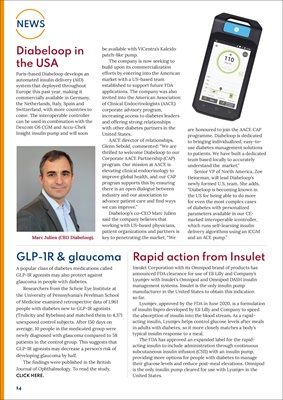 GLP-1R agonists may also protect against

glaucoma in people with diabetes.

Researchers from the Scheie Eye Institute at

the University of Pennsylvania's Perelman School

of Medicine examined retrospective data of 1,961

(Trulicity and Rybelsus) and matched them to 4,371

unexposed control subjects. After 150 days on

average, 10 people in the medicated group were

newly diagnosed with glaucoma compared to 58

patients in the control group. This suggests that

GLP-1R agonists may decrease a person's risk of

developing glaucoma by half.

The findings were published in the British

Journal of Ophthalmology. To read the study,

Insulet Corporation with its Omnipod brand of products has

announced FDA clearance for use of Eli Lilly and Company's

management systems. Insulet is the only insulin pump

manufacturer in the United States to obtain this indication

Lyumjev, approved by the FDA in June 2020, is a formulation

of insulin lispro developed by Eli Lilly and Company to speed

the absorption of insulin into the blood stream. As a rapidacting

in adults with diabetes, so it more closely matches a body's

typical insulin response to a meal.

The FDA has approved an expanded label for the rapidacting

insulin to include administration through continuous

providing more options for people with diabetes to manage

system that deployed throughout

Europe this past year, making it

the Netherlands, Italy, Spain and

Switzerland, with more countries to

can be used in combination with the

Insight insulin pump and will soon

be available with ViCentra's Kaleido

The company is now seeking to

build upon its commercialization

efforts by entering into the American

market with a US-based team

applications. The company was also

invited into the American Association

with other diabetes partners in the

Glenn Sebold, commented: "We are

thrilled to welcome Diabeloop to our

program. Our mission at AACE is

improve global health, and our CAP

program supports this by ensuring

there is an open dialogue between

industry and our association to

said the company believes that

patient organizations and partners is

key to penetrating the market, "We

are honoured to join the AACE CAP

to patients. We have built a dedicated

team based locally to accurately

"Diabeloop is becoming known in

the US for being able to do more

for even the most complex cases

of diabetes with personalized

parameters available in our CEmarked

and an ACE pump."