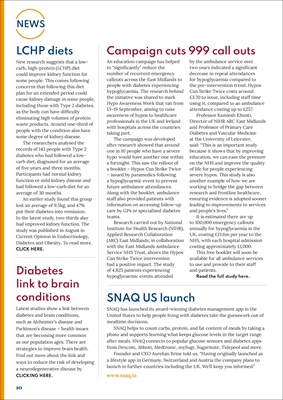 New research suggests that a lowcarb,

could improve kidney function for

some people. This comes following

concerns that following this diet

plan for an extended period could

cause kidney damage in some people,

including those with Type 2 diabetes,

as the body can have difficulty

waste products. Around one-third of

people with the condition also have

some degree of kidney disease.

The researchers analysed the

diabetes who had followed a lowcarb

diet, diagnosed for an average

of five years and three months.

function or mild kidney disease and

had followed a low-carb diet for an

An earlier study found this group

put their diabetes into remission.

In the latest study, two-thirds also

had improved kidney function. The

study was published in August in

Diabetes and Obesity. To read more,

Latest studies show a link between

such as Alzheimer's disease and

that are becoming more common

as our population ages. There are

Find out more about the link and

ways to reduce the risk of developing

a neurodegenerative disease by

An education campaign has helped

to "significantly" reduce the

callouts across the East Midlands to

hypoglycaemia. The research behind

the initiative was shared to mark

Hypo Awareness Week that ran from

awareness of hypos to healthcare

professionals in the UK and Ireland

with hospitals across the countries

The campaign was developed

after research showed that around

one in 10 people who have a severe

hypo would have another one within

a fortnight. This saw the rollout of

a booklet - Hypos Can Strike Twice

a hypoglycaemic event to prevent

Along with the booklet, ambulance

care by GPs or specialised diabetes

Research carried out by National

with the East Midlands Ambulance

had a positive impact. The study

by the ambulance service over

for hypoglycaemia compared to

Can Strike Twice costs around

using it, compared to an ambulance

attendance costing up to £257.

and Professor of Primary Care

at the University of Leicester,

said: "This is an important study

because it shows that by improving

education, we can ease the pressure

on the NHS and improve the quality

of life for people experiencing

severe hypos. This study is also

another example of how we are

working to bridge the gap between

leading to improvements to services

It is estimated there are up

annually for hypoglycaemia in the

NHS, with each hospital admission

This free booklet will soon be

available for all ambulance services

to use and provide to their staff

SNAQ has launched its award-winning diabetes management app in the

SNAQ helps to count carbs, protein, and fat content of meals by taking a

Founder and CEO Aurelian Brine told us, "Having originally launched as

a lifestyle app in Germany, Switzerland and Austria the company plans to

launch in further countries including the UK. We'll keep you informed."