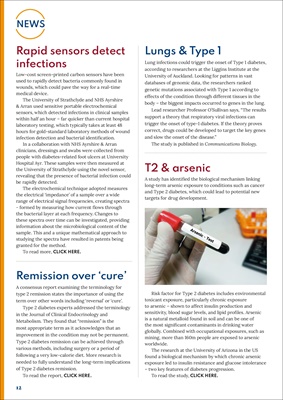 Low-cost screen-printed carbon sensors have been

wounds, which could pave the way for a real-time

The University of Strathclyde and NHS Ayrshire

within half an hour - far quicker than current hospital

In a collaboration with NHS Ayrshire & Arran

clinicians, dressings and swabs were collected from

Hospital Ayr. These samples were then measured at

the University of Strathclyde using the novel sensor,

revealing that the presence of bacterial infection could

the electrical 'impedance' of a sample over a wide

- formed by measuring how current flows through

the bacterial layer at each frequency. Changes to

these spectra over time can be investigated, providing

sample. This and a unique mathematical approach to

studying the spectra have resulted in patents being

granted for the method.

A consensus report examining the terminology for

type 2 remission states the importance of using the

term over other words including 'reversal' or 'cure'.

in the Journal of Clinical Endocrinology and

Metabolism. They found that "remission" is the

most appropriate term as it acknowledges that an

improvement in the condition may not be permanent.

Type 2 diabetes remission can be achieved through

various methods, including surgery or a period of

Lung infections could trigger the onset of Type 1 diabetes,

according to researchers at the Liggins Institute at the

University of Auckland. Looking for patterns in vast

genetic mutations associated with Type 1 according to

effects of the condition through different tissues in the

body - the biggest impacts occurred to genes in the lung.

support a theory that respiratory viral infections can

trigger the onset of type-1 diabetes. If the theory proves

correct, drugs could be developed to target the key genes

and slow the onset of the disease."

The study is published in Communications Biology.

A study has identified the biological mechanism linking

long-term arsenic exposure to conditions such as cancer

and Type 2 diabetes, which could lead to potential new

to arsenic - shown to affect insulin production and

the most significant contaminants in drinking water

globally. Combined with occupational exposures, such as

mining, more than 160m people are exposed to arsenic

The research at the University of Arizona in the US

found a biological mechanism by which chronic arsenic