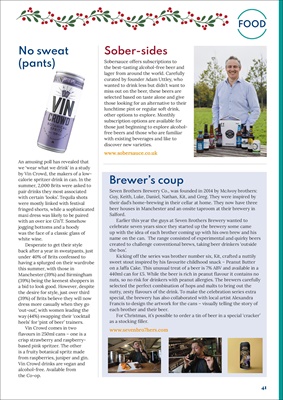 the best-tasting alcohol-free beer and

lager from around the world. Carefully

curated by founder Adam Uttley, who

wanted to drink less but didn't want to

miss out on the beer, these beers are

selected based on taste alone and give

those looking for an alternative to their

other options to explore. Monthly

subscription options are available for

those just beginning to explore alcoholfree

beers and those who are familiar

An amusing poll has revealed that

we 'wear what we drink' in a study

by Vin Crowd, the makers of a lowcalorie

spritzer drink in can. In the

pair drinks they most associated

were mostly linked with festival

fringed shorts, while a sophisticated

maxi dress was likely to be paired

with an over ice G'n'T. Somehow

jogging bottoms and a hoody

was the face of a classic glass of

Desperate to get their style

back after a year in sweatpants, just

under 40% of Brits confessed to

having a splurged on their wardrobe

this summer, with those in

(39%) being the keenest shoppers in

a bid to look good. However, despite

the desire for style, just over third

dress more casually when they go

'out-out', with women leading the

heels' for 'pint of beer' trainers.

pink spritzer. The other

is a fruity botanical spritz made

from raspberries, juniper and gin.

Vin Crowd drinks are vegan and

Seven Brothers Brewery Co., was founded in 2014 by McAvoy brothers:

Guy, Keith, Luke, Daniel, Nathan, Kit, and Greg. They were inspired by

their dad's home-brewing in their cellar at home. They now have three

Earlier this year the guys at Seven Brothers Brewery wanted to

celebrate seven years since they started up the brewery some came

name on the can. The range consisted of experimental and quirky beers

Kicking off the series was brother number six, Kit, crafted a nuttily

on a Jaffa Cake. This unusual treat of a beer is 7% ABV and available in a

440ml can for £5. While the beer is rich in peanut flavour it contains no

nuts, so no risk for drinkers with peanut allergies. The brewers carefully

nutty, zesty flavours of the drink. To make the celebration series extra

special, the brewery has also collaborated with local artist Alexandra

each brother and their beer.

For Christmas, it's possible to order a tin of beer in a special 'cracker'

as a stocking filler.