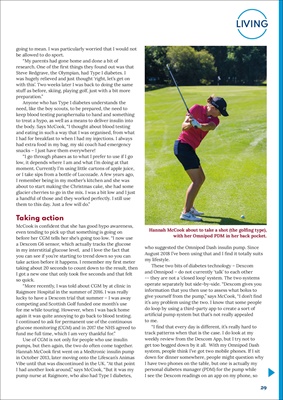 going to mean. I was particularly worried that I would not

be allowed to do sport.

"My parents had gone home and done a bit of

research. One of the first things they found out was that

Steve Redgrave, the Olympian, had Type I diabetes. I

was hugely relieved and just thought 'right, let's get on

with this'. Two weeks later I was back to doing the same

stuff as before, skiing, playing golf, just with a bit more

Anyone who has Type 1 diabetes understands the

need, like the boy scouts, to be prepared, the need to

keep blood testing paraphernalia to hand and something

to treat a hypo, as well as a means to deliver insulin into

the body. Says McCook, "I thought about blood testing

and eating in such a way that I was organised, from what

I had for breakfast to when I had my injections. I always

had extra food in my bag, my ski coach had emergency

snacks - I just have them everywhere!

low, it depends where I am and what I'm doing at that

or I take sips from a bottle of Lucozade. A few years ago,

I remember being in my mother's kitchen and she was

about to start making the Christmas cake, she had some

glacier cherries to go in the mix. I was a bit low and I just

a handful of those and they worked perfectly. I still use

them to this day. Just a few will do."

McCook is confident that she has good hypo awareness,

even tending to pick up that something is going on

before her CGM tells her she's going too low. "I now use

a Dexcom G6 sensor, which actually tracks the glucose

in my interstitial glucose level, and I love the fact that

take action before it happens. I remember my first meter

taking about 20 seconds to count down to the result, then

"More recently, I was told about CGM by at clinic in

Raigmore Hospital in the summer of 2016. I was really

lucky to have a Dexcom trial that summer - I was away

competing and Scottish Golf funded one month's use

for me while touring. However, when I was back home

again it was quite annoying to go back to blood testing.

I continued to ask for permanent use of the continuous

glucose monitoring (CGM) and in 2017 the NHS agreed to

fund me full time, which I am very thankful for."

Use of CGM is not only for people who use insulin

pumps, but then again, the two do often come together.

in October 2013, later moving onto the Lifescan's Animas

Vibe until that was discontinued in the UK. "At that point

I had another look around," says McCook, "But it was my

pump nurse at Raigmore, who also had Type I diabetes,

who suggested the Omnipod Dash insulin pump. Since

and Omnipod - do not currently 'talk' to each other --

they are not a 'closed loop' system. They two systems

information that you then use to assess what bolus to

give yourself from the pump," says McCook, "I don't find

it's any problem using the two. I know that some people

"I find that every day is different, it's really hard to

track patterns when that is the case. I do look at my

weekly review from the Dexcom App, but I try not to

get too bogged down by it all. With my Omnipod Dash

I have two phones on the table, but one is actually my

personal diabetes manager (PDM) for the pump while

I see the Dexcom readings on an app on my phone, so

Hannah McCook about to hit the ball.