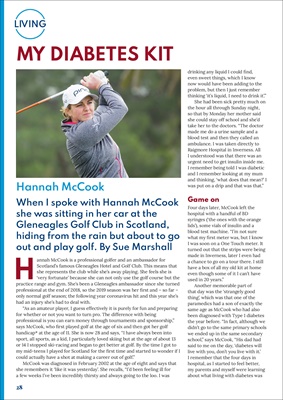 When I spoke with Hannah McCook

she was sitting in her car at the

hiding from the rain but about to go

out and play golf. By Sue Marshall

Hannah McCook is a professional golfer and an ambassador for

Scotland's famous Gleneagles Hotel and Golf Club. This means that

she represents the club while she's away playing. She feels she is

practice range and gym. She's been a Gleneagles ambassador since she turned

only normal golf season; the following year coronavirus hit and this year she's

had an injury she's had to deal with.

"As an amateur player, I guess effectively it is purely for fun and preparing

for whether or not you want to turn pro. The difference with being

professional is you can earn money through tournaments and sponsorship,"

says McCook, who first played golf at the age of six and then got her golf

sport, all sports, as a kid, I particularly loved skiing but at the age of about 13

or 14 I stopped ski-racing and began to get better at golf. By the time I got to

could actually have a shot at making a career out of golf."

she remembers it 'like it was yesterday'. She recalls, "I'd been feeling ill for

a few weeks I've been incredibly thirsty and always going to the loo. I was

drinking any liquid I could find,

even sweet things, which I know

now would have been adding to the

problem, but then I just remember

thinking 'it's liquid, I need to drink it'."

She had been sick pretty much on

the hour all through Sunday night,

so that by Monday her mother said

she could stay off school and she'd

take her to the doctors. "The doctor

made me do a urine sample and a

blood test and then they called an

ambulance. I was taken directly to

Raigmore Hospital in Inverness. All

I understood was that there was an

urgent need to get insulin inside me.

I remember being told I was diabetic

and I remember looking at my mum

and thinking, 'what does that mean?' I

was put on a drip and that was that."

hospital with a handful of BD

syringes ('the ones with the orange

lids'), some vials of insulin and a

blood test machine. "I'm not sure

what my first meter was, but I know

I was soon on a One Touch meter. It

turned out that the strips were being

made in Inverness, later I even had

a chance to go on a tour there. I still

got a box of all my old kit at home

even though some of it I can't have

Another memorable part of

that day was the 'strangely good

thing', which was that one of the

paramedics had a son of exactly the

same age as McCook who had also

been diagnosed with Type 1 diabetes

the year before. "In fact, although we

we ended up in the same secondary

school," says McCook, "His dad had

said to me on the day, 'diabetes will

live with you, don't you live with it.'

I remember that the four days in

hospital, as I started to feel better,

my parents and myself were learning

about what living with diabetes was