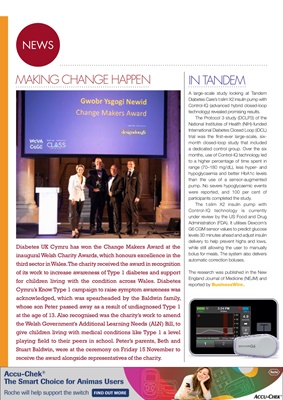 A large-scale study looking at Tandem

The Protocol 3 study (DCLP3) of the

trial was the first-ever large-scale, sixmonth closed-loop study that included

a dedicated control group. Over the six

months, use of Control-IQ technology led

to a higher percentage of time spent in

than the use of a sensor-augmented

were reported, and 100 per cent of

The t:slim X2 insulin pump with

under review by the US Food and Drug

levels 30 minutes ahead and adjust insulin

while still allowing the user to manually

The research was published on

Diabetes UK Cymru has won the Change Makers Award at the

inaugural Welsh Charity Awards, which honours excellence in the

third sector in Wales. The charity received the award in recognition

for children living with the condition across Wales. Diabetes

acknowledged, which was spearheaded by the Baldwin family,

at the age of 13. Also recognised was the charity's work to amend

give children living with medical conditions like Type 1 a level

playing field to their peers in school. Peter's parents, Beth and

Stuart Baldwin, were at the ceremony on Friday 15 November to

receive the award alongside representatives of the charity.