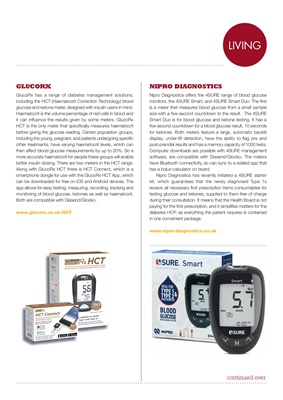 Nipro Diagnostics offers the 4SURE range of blood glucose

is a meter that measures blood glucose from a small sample

size with a five-second countdown to the result. The 4SURE

Smart Duo is for blood glucose and ketone testing. It has a

for ketones. Both meters feature a large, automatic backlit

display, under-fill detection, have the ability to flag pre and

post-prandial results and has a memory capacity of 1000 tests.

Computer downloads are possible with 4SURE management

software, are compatible with Diasend/Glooko. The meters

have Bluetooth connectivity, so can sync to a related app that

has a bolus calculator on board.

Nipro Diagnostics has recently initiated a 4SURE starter

kit, which guarantees that the newly diagnosed Type 1s

testing glucose and ketones, supplied to them free of charge

during their consultation. It means that the Health Board is not

paying for the first prescription, and it simplifies matters for the

diabetes HCP, as everything the patient requires is contained

in one convenient package.

GlucoRx has a range of diabetes management solutions,

glucose and ketone meter, designed with insulin users in mind.

Haematocrit is the volume percentage of red cells in blood and

it can influence the results given by some meters. GlucoRx

HCT is the only meter that specifically measures haematocrit

including the young, pregnant, and patients undergoing specific

other treatments, have varying haematocrit levels, which can

then affect blood glucose measurements by up to 20%. So a

more accurate haematocrit for people these groups will enable

better insulin dosing. There are two meters in the HCT range.

Along with GlucoRx HCT there is HCT Connect, which is a

smartphone dongle for use with the GlucoRx HCT App, which

can be downloaded for free on iOS and Android devices. The

monitoring of blood glucose, ketones as well as haematocrit.

Both are compatible with Diasend/Glooko.