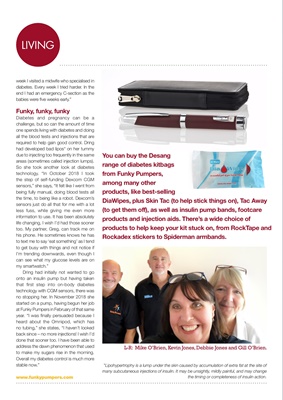 week I visited a midwife who specialised in

diabetes. Every week I tried harder. In the

end I had an emergency C-section as the

Diabetes and pregnancy can be a

challenge, but so can the amount of time

one spends living with diabetes and doing

all the blood tests and injections that are

had developed bad lipos* on her tummy

due to injecting too frequently in the same

So she took another look at diabetes

the step of self-funding Dexcom CGM

sensors," she says, "It felt like I went from

sensors just do all that for me with a lot

less fuss, while giving me even more

information to use. It has been absolutely

life changing, I wish I'd had those sooner

too. My partner, Greg, can track me on

his phone. He sometimes knows he has

to text me to say 'eat something' as I tend

to get busy with things and not notice if

I'm trending downwards, even though I

can see what my glucose levels are on

Dring had initially not wanted to go

onto an insulin pump but having taken

that first step into on-body diabetes

technology with CGM sensors, there was

no stopping her. In November 2018 she

started on a pump, having begun her job

at Funky Pumpers in February of that same

year. "I was finally persuaded because I

heard about the Omnipod, which has

no tubing," she states, "I haven't looked

back since - no more injections! I wish I'd

done that sooner too. I have been able to

address the dawn phenomenon that used

to make my sugars rise in the morning.

Overall my diabetes control is much more

You can buy the Desang

DiaWipes, plus Skin Tac (to help stick things on), Tac Away

(to get them off), as well as insulin pump bands, footcare

products and injection aids. There's a wide choice of

products to help keep your kit stuck on, from RockTape and

many subcutaneous injections of insulin. It may be unsightly, mildly painful, and may change

the timing or completeness of insulin action.