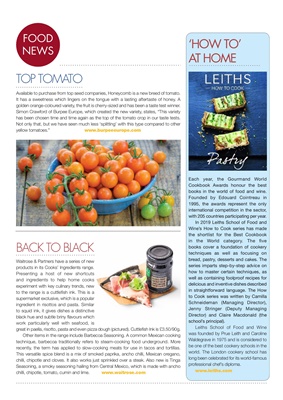 Each year, the Gourmand World

books in the world of food and wine.

Founded by Edouard Cointreau in

1995, the awards represent the only

international competition in the sector,

with 205 countries participating per year.

Wine's How to Cook series has made

the shortlist for the Best Cookbook

in the World category. The five

books cover a foundation of cookery

techniques as well as focusing on

bread, pastry, desserts and cakes. The

how to master certain techniques, as

well as containing foolproof recipes for

in straightforward language. The How

to Cook series was written by Camilla

Director) and Claire Macdonald (the

Leiths School of Food and Wine

was founded by Prue Leith and Caroline

Waldegrave in 1975 and is considered to

be one of the best cookery schools in the

world. The London cookery school has

long been celebrated for its world-famous

Waitrose & Partners have a series of new

products in its Cooks' Ingredients range.

Presenting a host of new shortcuts

and ingredients to help home cooks

to the range is a cuttlefish ink. This is a

supermarket exclusive, which is a popular

ingredient in risottos and pasta. Similar

to squid ink, it gives dishes a distinctive

work particularly well with seafood, is

Other items in the range include Barbecoa Seasoning. A common Mexian cooking

recently, the term has applied to slow-cooking meats for use in tacos and tortillas.

chilli, chipotle and cloves. It also works just sprinkled over a steak. Also new is Tinga

Seasoning, a smoky seasoning hailing from Central Mexico, which is made with ancho

Available to purchase from top seed companies, Honeycomb is a new breed of tomato

has a sweetness which lingers on the tongue with a lasting aftertaste of honey. A golden

orange-coloured variety, the fruit is cherry-sized and has been a taste test winner. Simon

Crawford of Burpee Europe, which created the new variety, states, "This variety has

been chosen time and time again as the top of the tomato crop in our taste tests. Not

only that, but we have seen much less 'splitting' with this type compared to other yellow