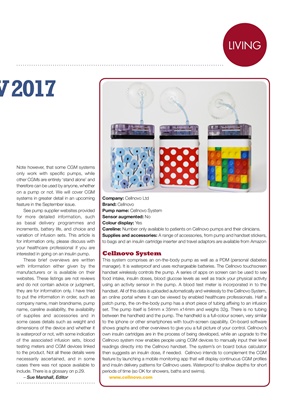 Note however, that some CGM systems

only work with specific pumps, while

other CGMs are entirely 'stand alone' and

therefore can be used by anyone, whether

on a pump or not. We will cover CGM

systems in greater detail in an upcoming

feature in the September issue.

for more detailed information, such

as basal delivery programmes and

increments, battery life, and choice and

variation of infusion sets. This article is

for information only, please discuss with

your healthcare professional if you are

These brief overviews are written

with information either given by the

manufacturers or is available on their

websites. These listings are not reviews

and do not contain advice or judgment,

they are for information only. I have tried

to put the information in order, such as

of supplies and accessories and in

some cases details such as weight and

dimensions of the device and whether it

is waterproof or not, with some indication

of the associated infusion sets, blood

to the product. Not all these details were

necessarily ascertained, and in some

cases there was not space available to

include. There is a glossary on p.29.

Careline: Number only available to patients on Cellnovo pumps and their clinicians.

Supplies and accessories: A range of accessories, from pump and handset stickers,

manager). It is waterproof and uses rechargeable batteries. The Cellnovo touchscreen

handset wirelessly controls the pump. A series of apps on screen can be used to see

using an activity sensor in the pump. A blood test meter is incorporated in to the

handset. All of this data is uploaded automatically and wirelessly to the Cellnovo System,

an online portal where it can be viewed by enabled healthcare professionals. Half a

patch pump, the on-the-body pump has a short piece of tubing affixing to an infusion

between the handheld and the pump. The handheld is a full-colour screen, very similar

to the iphone or other smartphones with touch-screen capability. On-board software

shows graphs and other overviews to give you a full picture of your control. Cellnovo's

own insulin cartridges are in the process of being developed, while an upgrade to the

readings directly into the Cellnovo handset. The system's on board bolus calculator

then suggests an insulin dose, if needed. Cellnovo intends to complement the CGM

and insulin delivery patterns for Cellnovo users. Waterproof to shallow depths for short

periods of time (so OK for showers, baths and swims).