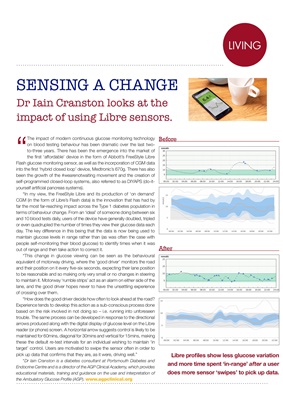 "The impact of modern continuous glucose monitoring technology on

testing behaviour has been dramatic over the last two-to-three years.

sensor, as well as the incorporation of CGM data into the first 'hybrid

closed loop' device, Medtronic's 670g. There has also been the growth

of the #wearenotwaiting movement and the creation of self-programmed

"In my view, the FreeStyle Libre and its production of 'on demand'

terms of behaviour change. From an 'ideal' of someone doing between six

and 10 blood tests daily, users of the device have generally doubled, tripled

day. The key difference in this being that the data is now being used to

out of range and then take action to correct it.

"This change in glucose viewing can be seen as the behavioural

equivalent of motorway driving, where the 'good driver' monitors the road

and their position on it every five-six seconds, expecting their lane position

to maintain it. Motorway 'rumble strips' act as an alarm on either side of the

lane, and the good driver hopes never to have the unsettling experience

of crossing over them.

"How does the good driver decide how often to look ahead at the road?

based on the risk involved in not doing so - i.e. running into unforeseen

trouble. The same process can be developed in response to the directional

reader (or phone) screen. A horizontal arrow suggests control is likely to be

maintained for 60mins, diagonal for 30mins and vertical for 15mins, making

target' control. Users are motivated to swipe the sensor often in order to

pick up data that confirms that they are, as it were, driving well."

*Dr Iain Cranston is a diabetes consultant at Portsmouth Diabetes and

Endocrine Centre and is a director of the AGP Clinical Academy, which provides

educational materials, training and guidance on the use and interpretation of

After Data shows a wider range of glucose

before sensor use compared to after.