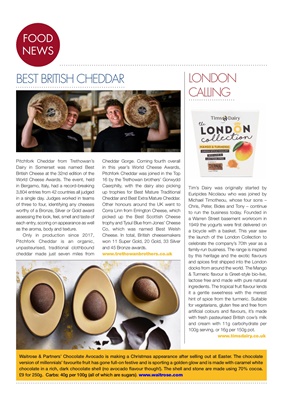 Waitrose & Partners' Chocolate Avocado is making a Christmas appearance after selling out at Easter. The chocolate

chocolate in a rich, dark chocolate shell (no avocado flavour though!). The shell and stone are made using 70% cocoa.

Tim's Dairy was originally started by

Euripides Nicolaou who was joined by

to run the business today. Founded in

a Warren Street basement workroom in

1949 the yogurts were first delivered on

a bicycle with a basket. This year saw

the launch of the London Collection to

celebrate the company's 70th year as a

family-run business. The range is inspired

by this heritage and the exotic flavours

and spices first shipped into the London

docks from around the world. The Mango

lactose free and made with pure natural

it a gentle sweetness with the merest

hint of spice from the turmeric. Suitable

for vegetarians, gluten free and free from

artificial colours and flavours, it's made

and cream with 11g carbohydrate per

Dairy in Somerset was named Best

British Cheese at the 32nd edition of the

in Bergamo, Italy, had a record-breaking

in a single day. Judges worked in teams

of three to four, identifying any cheeses

worthy of a Bronze, Silver or Gold award

assessing the look, feel, smell and taste of

each entry, scoring on appearance as well

as the aroma, body and texture.

Only in production since 2017,

Pitchfork Cheddar is an organic,

cheddar made just seven miles from

in this year's World Cheese Awards,

Pitchfork Cheddar was joined in the Top

16 by the Trethowan brothers' Gorwydd

Caerphilly, with the dairy also picking

up trophies for Best Mature Traditional

Other honours around the UK went to

Corra Linn from Errington Cheese, which

picked up the Best Scottish Cheese

Co, which was named Best Welsh