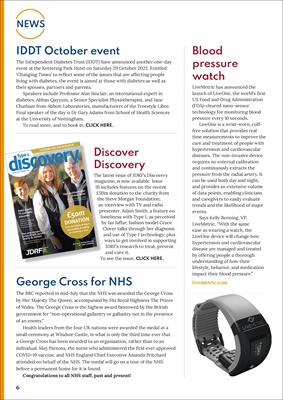 The InDependent Diabetes Trust (IDDT) have announced another one-day

event at the Kettering Park Hotel on Saturday 29 October 2022. Entitled

their spouses, partners and parents.

Speakers include Professor Alan Sinclair, an international expert in

Chatham from Abbott Laboratories, manufacturers of the Freestyle Libre.

at the University of Nottingham.

To read more, and to book in, CLICK HERE.

The latest issue of JDRF's Discovery

91 includes features on the recent

£50m donation to the charity from

an interview with TV and radio

presenter, Adam Smith; a feature on

loneliness with Type 1, as perceived

Clover talks through her diagnosis

and use of Type 1 technology; plus

ways to get involved in supporting

launch of LiveOne, the world's first

US Food and Drug Administration

LiveOne is a wrist-worn, cufffree

time measurements to improve the

care and treatment of people with

and continuously extracts the

pressure from the radial artery. It

can be used both day and night,

and provides an extensive volume

and caregivers to easily evaluate

trends and the likelihood of major

ease as wearing a watch, the

LiveOne device will change how

disease are managed and treated

by offering people a thorough

understanding of how their

by Her Majesty The Queen, accompanied by His Royal Highness The Prince

of Wales. The George Cross is the highest award bestowed by the British

government for "non-operational gallantry or gallantry not in the presence

small ceremony at Windsor Castle, in what is only the third time ever that

a George Cross has been awarded to an organisation, rather than to an

individual. May Parsons, the nurse who administered the first ever approved

attended on behalf of the NHS. The medal will go on a tour of the NHS

before a permanent home for it is found.

Congratulations to all NHS staff, past and present!