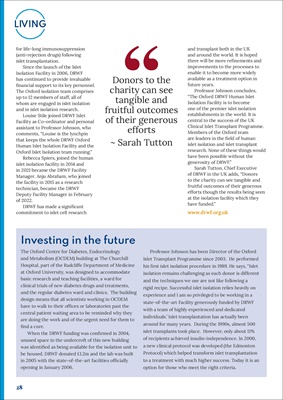 Since the launch of the Islet

has continued to provide invaluable

financial support to its key personnel.

whom are engaged in islet isolation

and in islet isolation research.

Facility as Co-ordinator and personal

assistant to Professor Johnson, who

comments, "Louise is the lynchpin

that keeps the whole DRWF Oxford

Human Islet Isolation Facility and the

islet isolation facility in 2014 and

in 2021 became the DRWF Facility

the facility in 2015 as a research

DRWF has made a significant

Investing in the future

The Oxford Centre for Diabetes, Endocrinology

and Metabolism (OCDEM) building at The Churchill

Hospital, part of the Radcliffe Department of Medicine

at Oxford University, was designed to accommodate

basic research and teaching facilities, a ward for

and the regular diabetes ward and clinics. The building

design means that all scientists working in OCDEM

have to walk to their offices or laboratories past the

central patient waiting area to be reminded why they

When the DRWF funding was confirmed in 2004,

unused space in the undercroft of this new building

was identified as being available for the isolation unit to

be housed. DRWF donated £1.2m and the lab was built

in 2005 with the state-of-the-art facilities officially

Professor Johnson has been Director of the Oxford

Islet Transplant Programme since 2003. He performed

his first islet isolation procedure in 1989. He says, "Islet

isolation remains challenging as each donor is different

and the techniques we use are not like following a

experience and I am so privileged to be working in a

with a team of highly experienced and dedicated

individuals.' Islet transplantation has actually been

islet transplants took place. However, only about 11%

of recipients achieved insulin-independence. In 2000,

a new clinical protocol was developed (the Edmonton

to a treatment with much higher success. Today it is an

option for those who meet the right criteria.

and transplant both in the UK

and around the world. It is hoped

there will be more refinements and

improvements to the processes to

enable it to become more widely

available as a treatment option in

Isolation Facility is to become

one of the premier islet isolation

establishments in the world. It is

central to the success of the UK

Members of the Oxford team

are leaders in the field of human

research. None of these things would

have been possible without the

of DRWF in the UK adds, "Donors

to the charity can see tangible and

fruitful outcomes of their generous

efforts though the results being seen

at the isolation facility which they