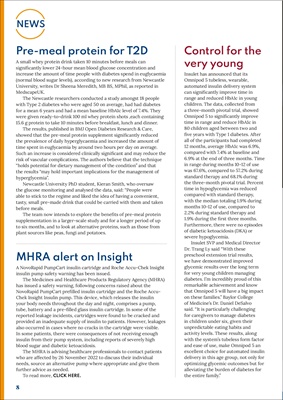 has issued a safety warning, following concerns raised about the

Insulin pump. This device, which releases the insulin

your body needs throughout the day and night, comprises a pump,

tube, battery and a pre-filled glass insulin cartridge. In some of the

reported leakage incidents, cartridges were found to be cracked and

provided an inadequate supply of insulin to patients. However, leakages

also occurred in cases where no cracks in the cartridge were visible.

In some patients, there were consequences of not receiving enough

insulin from their pump system, including reports of severely high

The MHRA is advising healthcare professionals to contact patients

who are affected by 26 November 2022 to discuss their individual

needs, source an alternative pump where appropriate and give them

Insulet has announced that its

can significantly improve time in

range and reduced HbA1c in young

children. The data, collected from

time in range and reduce HbA1c in

80 children aged between two and

five years with Type 1 diabetes. After

all of the participants had completed

compared with 7.4% at baseline and

standard therapy and 68.1% during

time in hypoglycemia was reduced

with the median totaling 1.9% during

2.2% during standard therapy and

1.9% during the first three months.

Furthermore, there were no episodes

of diabetic ketoacidosis (DKA) or

Dr. Trang Ly said "With these

we have demonstrated improved

glycemic results over the long term

diabetes. I'm incredibly proud of this

that Omnipod 5 will have a big impact

on these families." Baylor College

said. "It is particularly challenging

for caregivers to manage diabetes

in children under six, given their

activity levels. These results, along

with the system's tubeless form factor

and ease of use, make Omnipod 5 an

delivery in this age group, not only for

optimizing glycemic outcomes but for

alleviating the burden of diabetes for

A small whey protein drink taken 10 minutes before meals can

increase the amount of time people with diabetes spend in euglycaemia

(normal blood sugar levels), according to new research from Newcastle

The Newcastle researchers conducted a study amongst 18 people

with Type 2 diabetes who were aged 50 on average, had had diabetes

were given ready-to-drink 100 ml whey protein shots ,each containing

15.6 g protein to take 10 minutes before breakfast, lunch and dinner.

the prevalence of daily hyperglycaemia and increased the amount of

time spent in euglycaemia by around two hours per day on average.

Such an increase is considered clinically significant and may reduce the

risk of vascular complications. The authors believe that the technique

"holds potential for dietary management of the condition" and that

the results "may hold important implications for the management of

the glucose monitoring and analysed the data, said: "People were

able to stick to the regime and liked the idea of having a convenient,

tasty, small pre-made drink that could be carried with them and taken

to six months, and to look at alternative proteins, such as those from