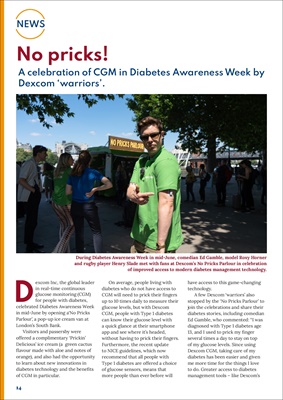 Diabetes UK warns of a 'perfect storm' for children at

Dual crises of soaring obesity rates and a rising

cost-of-living are creating a perfect storm

putting the health of children at risk, according

to analysis from Diabetes UK.

The charity has revealed that there has been a more

than 50% increase in children registered with Type 2

in England and Wales in the last five years. Data released

earlier this year also revealed the biggest increase in

childhood obesity since records began in 2006.

These figures confirm a growing trend of serious

health conditions related to obesity that are becoming

more prevalent in a younger demographic than ever

before. Diabetes UK warns that the trend is of particular

concern now that the Government has put key plans on

hold regarding its childhood obesity commitments.

Data shows that the impact of type 2 diabetes is being

disproportionately felt by children living in the most

deprived areas across England and Wales. 4 in 10 children

and young people living with type 2 diabetes are from the

most deprived areas, compared to only 1 in 19 from the

Type 2 diabetes is known to have more severe and

acute consequences in children, and without the right

treatment and support, can lead to serious complications.

In response to the figures, Diabetes UK is urging the

UK Government not to abandon their commitments to

child health. Specifically, the charity is calling on the

• Urgently reverse its decision to delay restrictions to

• To go much further to meet its goal of halving

• To do more to address long-standing health disparities,

including outlining steps in the forthcoming Health

as the charity's new Director of Engagement and

Fundraising to lead a 130-strong department of

and fundraising professionals, James will be part of the

With 19 years' experience in the charity sector, Beeby

he led on organisational strategy development and

reinvigorating the fundraising programme. Before that,

at Prostate Cancer UK, he was instrumental in delivering

the audience-led engagement strategy that drove

transformational growth in income and awareness. He

A Generation to End the Harm. At the heart of this

strategy are two core ambitions, first to to help people

live well and longer with diabetes, and second, to cure or

In support of this, he will lead work to engage more

people than ever before with Diabetes UK's cause and

build a community of millions with the shared aim of