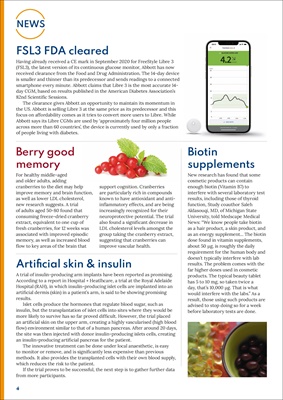 (FSL3), the latest version of its continuous glucose monitor, Abbott has now

received clearance from the Food and Drug Administration. The 14-day device

smartphone every minute. Abbott claims that Libre 3 is the most accurate 14-

day CGM, based on results published in the American Diabetes Association's

The clearance gives Abbott an opportunity to maintain its momentum in

the US. Abbott is selling Libre 3 at the same price as its predecessor and this

focus on affordability comes as it tries to convert more users to Libre. While

across more than 60 countries', the device is currently used by only a fraction

of people living with diabetes.

New research has found that some

enough biotin (Vitamin B7) to

results, including those of thyroid

as an energy supplement... The biotin

about 50 µg, is roughly the daily

requirement for the human body and

results. The problem comes with the

would interfere with the labs." As a

result, those using such products are

advised to stop doing so for a week

before laboratory tests are done.

cranberries to the diet may help

as well as lower LDL cholesterol,

extract, equivalent to one cup of

fresh cranberries, for 12 weeks was

memory, as well as increased blood

flow to key areas of the brain that

are particularly rich in compounds

known to have antioxidant and antiinflammatory

effects, and are being

increasingly recognized for their

also found a significant decrease in

LDL cholesterol levels amongst the

suggesting that cranberries can

A trial of insulin-producing arm implants have been reported as promising.

According to a report in Hospital + Heatlhcare, a trial at the Royal Adelaide

Hospital (RAH), in which insulin-producing islet cells are implanted into an

artificial dermis (skin) in a patient's arm, is said to be showing promising

Islet cells produce the hormones that regulate blood sugar, such as

insulin, but the transplantation of islet cells into sites where they would be

more likely to survive has so far proved difficult. However, the trial placed

an artificial skin on the upper arm, creating a highly vascularised (high blood

flow) environment similar to that of a human pancreas. After around 20 days,

the site was then injected with donor insulin-producing islets cells, creating

an insulin-producing artificial pancreas for the patient.

The innovative treatment can be done under local anaesthetic, is easy

to monitor or remove, and is significantly less expensive than previous

methods. It also provides the transplanted cells with their own blood supply,

which reduces the risk to the patient.

If the trial proves to be successful, the next step is to gather further data