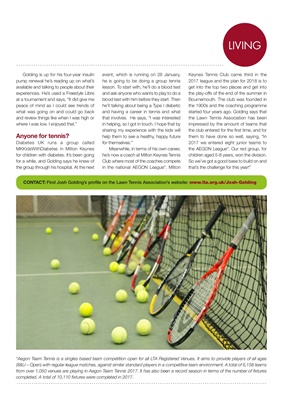 *Aegon Team Tennis is a singles based team competition open for all LTA Registered Venues. It aims to provide players of all ages

(8&U - Open) with regular league matches, against similar standard players in a competitive team environment. A total of 6,158 teams

from over 1,050 venues are playing in Aegon Team Tennis 2017. It has also been a record season in terms of the number of fixtures

Golding is up for his four-year insulin

available and talking to people about their

at a tournament and says, "It did give me

peace of mind as I could see trends of

what was going on and could go back

and review things like when I was high or

where I was low. I enjoyed that."

for children with diabetes. It's been going

for a while, and Golding says he knew of

the group through his hospital. At the next

event, which is running on 28 January,

he is going to be doing a group tennis

lesson. To start with, he'll do a blood test

and ask anyone who wants to play to do a

blood test with him before they start. Then

he'll talking about being a Type I diabetic

and having a career in tennis and what

in helping, so I got in touch. I hope that by

sharing my experience with the kids will

help them to see a healthy, happy future

Club where most of the coaches compete

in the national AEGON League*. Milton

get into the top two places and get into

the play-offs of the end of the summer in

Bournemouth. The club was founded in

the 1900s and the coaching programme

the Lawn Tennis Association has been

impressed by the amount of teams that

the club entered for the first time, and for

them to have done so well, saying, "In

2017 we entered eight junior teams to

the AEGON League*. Our red group, for

So we've got a good base to build on and

that's the challenge for this year!"