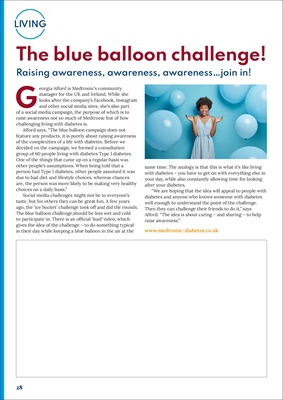 manager for the UK and Ireland. While she

of a social media campaign, the purpose of which is to

raise awareness not so much of Medtronic but of how

challenging living with diabetes is.

Alford says, "The blue balloon campaign does not

feature any products, it is purely about raising awareness

of the complexities of a life with diabetes. Before we

decided on the campaign, we formed a consultation

group of 60 people living with diabetes Type I diabetes.

other people's assumptions. When being told that a

person had Type I diabetes, other people assumed it was

due to bad diet and lifestyle choices, whereas chances

are, the person was more likely to be making very healthy

choices on a daily basis."

taste, but for others they can be great fun. A few years

ago, the 'ice bucket' challenge took off and did the rounds.

The blue balloon challenge,should be less wet and cold

to participate in. There is an official 'lead' video, which

gives the idea of the challenge - to do something typical

same time. The analogy is that this is what it's like living

with diabetes - you have to get on with everything else in

your day, while also constantly allowing time for looking

"We are hoping that the idea will appeal to people with

diabetes and anyone who knows someone with diabetes

well enough to understand the point of the challenge.

Then they can challenge their friends to do it," says

Alford. "The idea is about caring - and sharing - to help