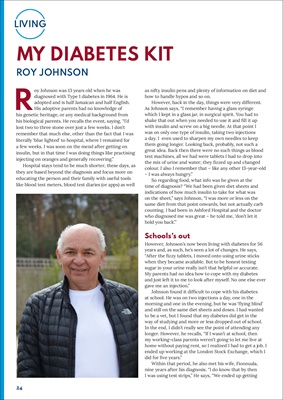 Roy Johnson was 13 years old when he was

adopted and is half Jamaican and half English.

His adoptive parents had no knowledge of

his genetic heritage, or any medical background from

his biological parents. He recalls the event, saying, "I'd

lost two to three stone over just a few weeks. I don't

remember that much else, other than the fact that I was

literally 'blue lighted' to hospital, where I remained for

a few weeks. I was soon on the mend after getting on

insulin, but in that time I was doing things like practicing

injecting on oranges and generally recovering."

Hospital stays tend to be much shorter, these days, as

they are based beyond the diagnosis and focus more on

educating the person and their family with useful tools

as nifty insulin pens and plenty of information on diet and

how to handle hypos and so on.

However, back in the day, things were very different.

As Johnson says, "I remember having a glass syringe

which I kept in a glass jar in, surgical spirit. You had to

with insulin and screw on a big needle. At that point I

was on only one type of insulin, taking two injections

a day. I even used to sharpen my own needles to keep

them going longer. Looking back, probably, not such a

great idea. Back then there were no such things as blood

test machines, all we had were tablets I had to drop into

the mix of urine and water; they fizzed up and changed

colour. I also I remember that - like any other 13-year-old

So regarding food, what info was he given at the

time of diagnosis? "We had been given diet sheets and

indications of how much insulin to take for what was

on the sheet," says Johnson, "I was more or less on the

same diet from that point onwards, but not actually carb

counting. I had been in Ashford Hospital and the doctor

who diagnosed me was great - he told me, 'don't let it

However, Johnson's now been living with diabetes for 56

years and, as such, he's seen a lot of changes. He says,

"After the fizzy tablets, I moved onto using urine sticks

when they became available. But to be honest testing

sugar in your urine really isn't that helpful or accurate.

My parents had no idea how to cope with my diabetes

and just left it to me to look after myself. No one else ever

gave me an injection."

Johnson found it difficult to cope with his diabetes

at school. He was on two injections a day, one in the

morning and one in the evening, but he was 'flying blind'

and still on the same diet sheets and doses. I had wanted

to be a vet, but I found that my diabetes did get in the

way of studying and more or less dropped out of school.

In the end, I didn't really see the point of attending any

longer. However, he recalls, "If I wasn't at school, then

my working-class parents weren't going to let me live at

home without paying rent, so I realized I had to get a job. I

ended up working at the London Stock Exchange, which I

Within that period, he also met his wife, Fionnuala,

nine years after his diagnosis. "I do know that by then

I was using test strips," He says, "We ended up getting