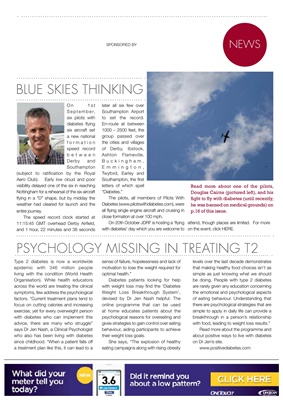 On 1st later all six few over

six pilots with to set the record.

diabetes flying En-route at between

a new national group passed over

formation the cities and villages

(subject to ratification by the Royal Twyford, Earley and

visibility delayed one of the six in reaching letters of which spell Read more about one of the pilots,

Nottingham for a rehearsal of the six aircraft “Diabetes.” Douglas Cairns (pictured left), and his

flying in a “D” shape, but by midday the The pilots, all members of Pilots With fight to fly with diabetes (until recently,

weather had cleared for launch and the Diabetes (www.pilotswithdiabetes.com), were he was banned on medical grounds) on

entire journey. all flying single engine aircraft and cruising in p.16 of this issue.

The speed record clock started at close formation at over 100 mph.

11:15:45 GMT overhead Derby Airfield, On 20th October JDRF is hosting a ‘flying attend, though places are limited. For more

and 1 hour, 22 minutes and 38 seconds with diabetes’ day which you are welcome to on the event, click HERE.

Type 2 diabetes is now a worldwide sense of failure, hopelessness and lack of levels over the last decade demonstrates

living with the condition (World Health optimal health.” simple as just knowing what we should

exercise, yet for every overweight person at home educates patients about the simple to apply in daily life can provide a

advice, there are many who struggle” gives strategies to gain control over eating with food, leading to weight loss results.”

since childhood. “When a patient falls off She says, “The explosion of healthy on Dr Jen’s site.

a treatment plan like this, it can lead to a eating campaigns along with rising obesity www.positivediabetes.com