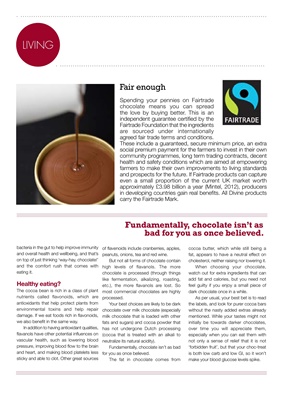 Spending your pennies on Fairtrade

chocolate means you can spread

the love by buying better. This is an

independent guarantee certified by the

Fairtrade Foundation that the ingredients

are sourced under internationally

These include a guaranteed, secure minimum price, an extra

social premium payment for the farmers to invest in their own

health and safety conditions which are aimed at empowering

farmers to make their own improvements to living standards

and prospects for the future. If Fairtrade products can capture

even a small proportion of the current UK market worth

bad for you as once believed.

bacteria in the gut to help improve immunity of flavenoids include cranberries, apples, cocoa butter, which while still being a

and overall health and wellbeing, and that’s peanuts, onions, tea and red wine. fat, appears to have a neutral effect on

on top of just thinking ‘way-hay, chocolate!’ But not all forms of chocolate contain cholesterol, neither raising nor lowering it.

and the comfort rush that comes with high levels of flavanols. The more When choosing your chocolate,

eating it. chocolate is processed (through things watch out for extra ingredients that can

like fermentation, alkalizing, roasting, add fat and calories, but you need not

Healthy eating? etc.), the more flavanols are lost. So feel guilty if you enjoy a small piece of

The cocoa bean is rich in a class of plant most commercial chocolates are highly dark chocolate once in a while.

nutrients called flavonoids, which are processed. As per usual, your best bet is to read

antioxidants that help protect plants from Your best choices are likely to be dark the labels, and look for purer cocoa bars

damage. If we eat foods rich in flavonoids, milk chocolate that is loaded with other mentioned. While your tastes might not

we also benefit in the same way. fats and sugars) and cocoa powder that initially be towards darker chocolates,

In addition to having antioxidant qualities, has not undergone Dutch processing over time you will appreciate them,

vascular health, such as lowering blood neutralize its natural acidity). not only a sense of relief that it is not

pressure, improving blood flow to the brain Fundamentally, chocolate isn’t as bad ‘forbidden fruit’, but that your choc-treat

and heart, and making blood platelets less for you as once believed. is both low carb and low GI, so it won’t

sticky and able to clot. Other great sources The fat in chocolate comes from make your blood glucose levels spike.