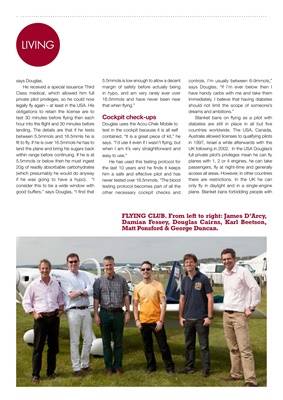 He received a special issuance Third margin of safety before actually being says Douglas, “if I’m ever below then I

Class medical, which allowed him full in hypo, and am very rarely ever over have handy carbs with me and take them

private pilot privileges, so he could now 16.5mmols and have never been near immediately. I believe that having diabetes

legally fly again – at least in the USA. His that when flying.” should not limit the scope of someone’s

obligations to retain the license are to dreams and ambitions.”

landing. The details are that if he tests test in the cockpit because it is all self countries worldwide. The USA, Canada,

between 5.5mmols and 16.5mmls he is contained. “It is a great piece of kit,” he Australia allowed licenses to qualifying pilots

land the plane and bring his sugars back when I am it’s very straightforward and UK following in 2002. In the USA Douglas’s

within range before continuing. If he is at easy to use.” full private pilot’s privileges mean he can fly

5.5mmols or below then he must ingest He has used this testing protocol for planes with 1, 2 or 4 engines, he can take

20g of readily absorbable carbohydrates the last 10 years and he finds it keeps passengers, fly at night-time and generally

(which presumably he would do anyway him a safe and effective pilot and has access all areas. However, in other countries

if he was going to have a hypo). “I never tested over 16.5mmols. “The blood there are restrictions. In the UK he can