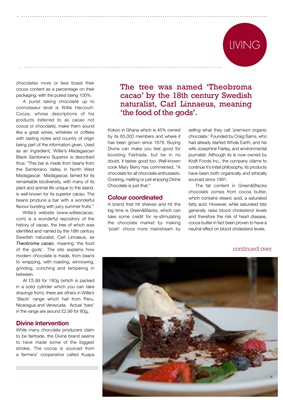 chocolates more or less boast their

packaging, with the purest being 100%. cacao’ by the 18th century Swedish

A purist taking chocolate up to

Cooze, whose descriptions of his ‘the food of the gods’.

products (referred to as cacao not

cocoa or chocolate), make them sound

like a great wines, whiskies or coffees Kokoo in Ghana which is 45% owned selling what they call ‘premium organic

with tasting notes and country of origin by its 65,000 members and where it chocolate.’ Founded by Craig Sams, who

being part of the information given. Used has been grown since 1878. Buying had already started Whole Earth, and his

as an ingredient, Willie’s Madagascan Divine can make you feel good for wife Josephine Fairley, and environmental

Black Sambirano Superior is described boosting Fairtrade, but be in no journalist. Although its is now owned by

thus: “This bar is made from beans from doubt, it tastes good too. Well-known Kraft Foods Inc., the company claims to

Madagascar. Madagascar, famed for its chocolate for all chocolate enthusiasts. have been both organically and ethically

remarkable biodiversity, with many of its Cooking, melting or just enjoying Divine sourced since 1991.

plant and animal life unique to the island, Chocolate is just that.” The fat content in Green&Blacks

is well known for its superior cacao. The chocolate comes from cocoa butter,

beans produce a bar with a wonderful Colour coordinated which contains stearic acid, a saturated

flavour bursting with juicy summer fruits.” A brand that hit shelves and hit the fatty acid. However, while saturated fats

com) is a wonderful repository of the take some credit for re-stimulating and therefore the risk of heart disease,

history of cacao, the tree of which was the chocolate market by making cocoa butter in fact been proven to have a

of the gods’. The site explains how continued over

modern chocolate is made, from beans

to wrapping, with roasting, winnowing,

grinding, conching and tempering in

in a solid cylinder which you can take

shavings from), there are others in Willie’s

‘Black’ range which hail from Peru,

While many chocolate producers claim

to be fairtrade, the Divine brand seems

to have made some of the biggest

strides. The cocoa is sourced from