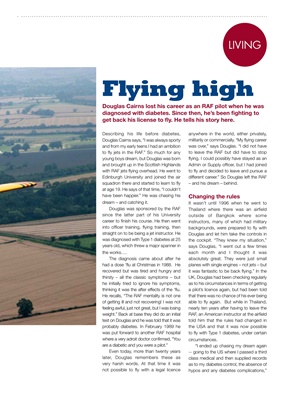 diagnosed with diabetes. Since then, he’s been fighting to

get back his license to fly. He tells his story here.

Describing his life before diabetes, anywhere in the world, either privately,

Douglas Cairns says, “I was always sporty militarily or commercially. “My flying career

and from my early teens I had an ambition was over,” says Douglas. “I did not have

to fly jets in the RAF.” So much for any to leave the RAF but did have to stop

young boys dream, but Douglas was born flying. I could possibly have stayed as an

and brought up in the Scottish Highlands Admin or Supply officer, but I had joined

with RAF jets flying overhead. He went to to fly and decided to leave and pursue a

Edinburgh University and joined the air different career.” So Douglas left the RAF

squadron there and started to learn to fly – and his dream – behind.

have been happier.” He was chasing his Changing the rules

career to finish his course. He then went instructors, many of which had military

into officer training, flying training, then backgrounds, were prepared to fly with

straight on to be being a jet instructor. He Douglas and let him take the controls in

was diagnosed with Type 1 diabetes at 25 the cockpit. “They knew my situation,”

years old, which threw a major spanner in says Douglas, “I went out a few times

the works…. each month and I thought it was

The diagnosis came about after he absolutely great. They were just small

had a dose ‘flu at Christmas in 1988. He planes with single engines – not jets – but

recovered but was tired and hungry and it was fantastic to be back flying.” In the

thirsty – all the classic symptoms – but UK, Douglas had been checking regularly

he initially tried to ignore his symptoms, as to his circumstances in terms of getting

thinking it was the after effects of the ‘flu. a pilot’s licence again, but had been told

He recalls, “The RAF mentality is not one that there was no chance of his ever being

of getting ill and not recovering! I was not able to fly again. But while in Thailand,

feeling awful, just not great, but I was losing nearly ten years after having to leave the

weight.” Back at base they did do an initial RAF, an American instructor at the airfield

probably diabetes. In February 1989 he the USA and that it was now possible

was put forward to another RAF hospital to fly with Type 1 diabetes, under certain

where a very adroit doctor confirmed, “You circumstances.

are a diabetic and you were a pilot.” “I ended up chasing my dream again

Even today, more than twenty years -- going to the US where I passed a third

later, Douglas remembers these as class medical and then supplied records

very harsh words. At that time it was as to my diabetes control, the absence of

not possible to fly with a legal licence hypos and any diabetes complications,”