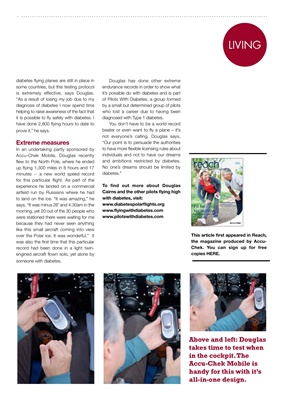 some countries, but this testing protocol endurance records in order to show what

is extremely effective, says Douglas. it’s possible do with diabetes and is part

“As a result of losing my job due to my of Pilots With Diabetes, a group formed

it is possible to fly safely with diabetes. I diagnosed with Type 1 diabetes.

have done 2,800 flying hours to date to You don’t have to be a world record

prove it,” he says. beater or even want to fly a plane – it’s

Extreme measures “Our point is to persuade the authorities

Accu-Chek Mobile, Douglas recently individuals and not to have our dreams

flew to the North Pole, where he ended and ambitions restricted by diabetes.

for this particular flight. As part of the

to land on the ice. “It was amazing,” he with diabetes, visit: One man’s fight to

morning, yet 20 out of the 30 people who www.flyingwithdiabetes.com springtime

How to boost your immune system

were stationed there were waiting for me www.pilotswithdiabetes.com

because they had never seen anything

over the Polar ice. It was wonderful.” It This article first appeared in Reach,

record had been done in a light twin- Chek. You can sign up for free

Above and left: Douglas

takes time to test when

in the cockpit. The

handy for this with it’s