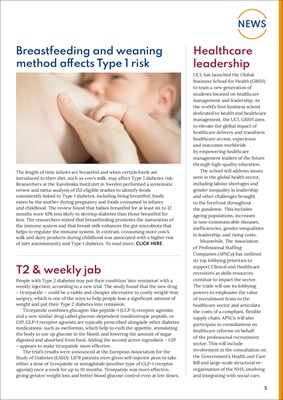 UCL has launched the Global

to train a new generation of

management and leadership. As

dedicated to health and healthcare

to elevate the global impact of

management leaders of the future

The school will address issues

seen in the global health sector,

including labour shortages and

and other challenges brought

to the forefront throughout

the pandemic. This includes

in leadership, and rising costs.

its top lobbying priorities to

continue to impact the sector.

The trade will use its lobbying

powers to emphasise the value

of recruitment firms to the

the costs of a compliant, flexible

participate in consultations on

of the professional recruitment

sector. This will include

involvement in the consultation on

the Government's Health and Care

of the NHS, involving

and integrating with social care.

weekly injection, according to a new trial. The study found that the new drug

surgery, which is one of the ways to help people lose a significant amount of

weight and put their Type 2 diabetes into remission.

and a new similar drug called glucose-dependent insulinotropic peptide, or

GIP. GLP-1 receptor agonists are typically prescribed alongside other diabetes

medications, such as metformin, which help to curb the appetite, stimulating

the body to use up glucose in the blood, and lowering the amount of sugar

The trial's results were announced at the European Association for the

Study of Diabetes (EASD). 1,879 patients were given self-injector pens to take

agonist) once a week for up to 10 months. Tirzepatide was more effective,

introduced to their diet, such as cow's milk, may affect Type 1 diabetes risk.

Researchers at the Karolinska Institutet in Sweden performed a systematic

review and meta-analysis of 152 eligible studies to identify foods

consistently linked to Type 1 diabetes, including being breastfed, foods

eaten by the mother during pregnancy and foods consumed in infancy

and childhood. The review found that babies breastfed for at least six to 12

less. The researchers stated that breastfeeding promotes the maturation of