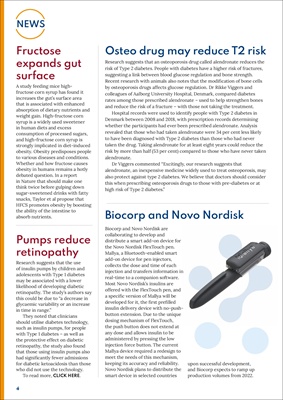 corn syrup has found it

that is associated with enhanced

absorption of dietary nutrients and

syrup is a widely used sweetener

in human diets and excess

and high-fructose corn syrup is

to various diseases and conditions.

Whether and how fructose causes

obesity in humans remains a hotly

debated question2,3. In a report

in Nature that should make one

think twice before gulping down

the ability of the intestine to

Research suggests that an osteoporosis drug called alendronate reduces the

risk of Type 2 diabetes. People with diabetes have a higher risk of fractures,

suggesting a link between blood glucose regulation and bone strength.

rates among those prescribed alendronate - used to help strengthen bones

and reduce the risk of a fracture - with those not taking the treatment.

Denmark between 2008 and 2018, with prescription records determining

whether the participants had ever been prescribed alendronate. Analysis

taken the drug. Taking alendronate for at least eight years could reduce the

alendronate, an inexpensive medicine widely used to treat osteoporosis, may

also protect against type 2 diabetes. We believe that doctors should consider

Research suggests that the use

of insulin pumps by children and

may be associated with a lower

this could be due to "a decrease in

glycaemic variability or an increase

in time in range."

They noted that clinicians

such as insulin pumps, for people

with Type 1 diabetes - as well as

the protective effect on diabetic

that those using insulin pumps also

for diabetic ketoacidosis than those

who did not use the technology.

Biocorp and Novo Nordisk are

collaborating to develop and

distribute a smart add-on device for

collects the dose and time of each

injection and transfers information in

real-time to a companion software.

Most Novo Nordisk's insulins are

offered with the FlexTouch pen, and

a specific version of Mallya will be

developed for it, the first prefilled

extension. Due to the unique

the push button does not extend at

any dose and allows insulin to be

administered by pressing the low

Mallya device required a redesign to

meet the needs of this mechanism,

keeping its accuracy and reliability.

Novo Nordisk plans to distribute the

and Biocorp expects to ramp up