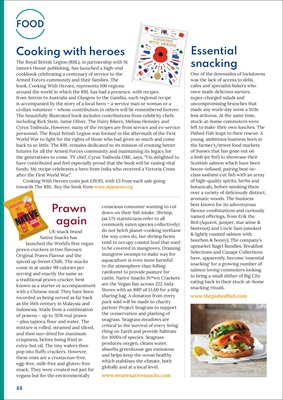 The Royal British Legion (RBL), in partnership with St

cookbook celebrating a centenary of service to the

Armed Forces community and their families. The

around the world in which the RBL has had a presence, with recipes

from Antrim to Australia and Glasgow to the Gambia, each regional recipe

civilian volunteer - whose contribution to others will be remembered forever.

Cyrus Todiwala. However, many of the recipes are from service and ex-service

personnel. The Royal British Legion was formed in the aftermath of the First

back to so little. The RBL remains dedicated to its mission of creating better

funds. My recipe celebrates a hero from India who received a Victoria Cross

after the First World War."

Cooking With Heroes costs just £19.95, with £5 from each sale going

towards The RBL. Buy the book from www.stjamess.org

One of the downsides of lockdowns

cafes and specialist bakers who

once made delicious sarnies,

made any work-day seem a little

less arduous. At the same time,

left to make their own lunches. The

Pished Fish leapt to their rescue. A

of Sussex that has gone out on

a limb (or fin!) to showcase their

Scottish salmon which have been

of high-quality spirits, herbs and

botanicals, before smoking them

over a variety of deliciously distinct,

best known for its adventurous

named offerings, from Erik the

snacking' for a growing number of

to bring a small slither of Big City

eating back to their stuck-at-home

Original Prawn Flavour and the

spiced up Sweet Chilli. The snacks

come in at under 99 calories per

serving and exactly the same as

known as a starter or accompaniment

with a Chinese meal. They have been

recorded as being served as far back

as the 16th century in Malaysia and

Indonesia. Made from a combination

- plus tapioca flour and water. The

mixture is rolled, steamed and sliced,

and then sun-dried for maximum

crispiness, before being fried in

extra-hot oil. The tiny wafers then

pop into fluffy crackers. However,

these ones are a crustacean-free,

snack. They were created not just for

vegans but for the environmentally

down on their fish intake. Shrimp,

(as UN statisticians refer to all

do not belch planet-cooking methane

the way cows do, but shrimp farms

to be covered in mangroves. Draining

mangrove swamps to make way for

aquaculture is even more harmful

to the atmosphere than felling

rainforest to provide pasture for

are the Vegan Bay across 222 Asda

sharing bag. A donation from every

pack sold will be made to charity

the conservation and planting of

critical to the survival of every living

thing on Earth and provide habitats

for 1000s of species. Seagrass

and helps keep the ocean healthy

which stabilises the climate, both

globally and at a local level.