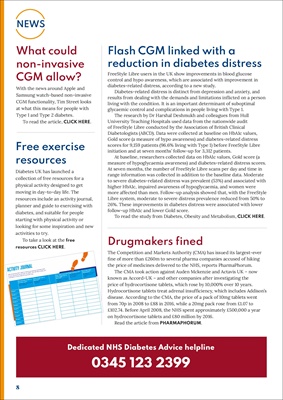 With the news around Apple and

at what this means for people with

Flash CGM linked with a

control and hypo awareness, which are associated with improvement in

diabetes-related distress, according to a new study.

Diabetes-related distress is distinct from depression and anxiety, and

living with the condition. It is an important determinant of suboptimal

glycaemic control and complications in people living with Type 1.

The research by Dr Harshal Deshmukh and colleagues from Hull

of FreeStyle Libre conducted by the Association of British Clinical

Diabetologists (ABCD). Data were collected at baseline on HbA1c values,

Gold score (a measure of hypo awareness) and diabetes-related distress

initiation and at seven months' follow-up for 3,312 patients.

At seven months, the number of FreeStyle Libre scans per day and time in

range information was collected in addition to the baseline data. Moderate

to severe diabetes-related distress was prevalent (53%) and associated with

higher HbA1c, impaired awareness of hypoglycaemia, and women were

more affected than men. Follow-up analysis showed that, with the FreeStyle

Libre system, moderate to severe distress prevalence reduced from 50% to

26%. These improvements in diabetes distress were associated with lower

To read the study from Diabetes, Obesity and Metabolism, CLICK HERE.

The Competition and Markets Authority (CMA) has issued its largest-ever

the price of medicines delivered to the NHS, reports PharmaPhorum.

known as Accord-UK - and other companies after investigating the

disease. According to the CMA, the price of a pack of 10mg tablets went

on hydrocortisone tablets and £80 million by 2016.

Read the article from PHARMAPHORUM.

Diabetes UK has launched a

collection of free resources for a

physical activity designed to get

moving in day-to-day life. The

resources include an activity journal,

planner and guide to exercising with

diabetes, and suitable for people

starting with physical activity or

looking for some inspiration and new

Take a look at the FREE

of your successes for the next 10 weeks. This will help to keep you

motivated to move a little bit more each day.

For example: "I'm going for a

walk in the park".

How will I overcome

to ask someone I know

For example: "I walked

How did I feel

I managed to go for