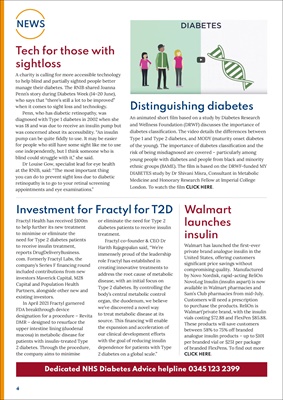 Tech for those with

A charity is calling for more accessible technology

who says that "there's still a lot to be improved"

when it comes to sight loss and technology.

Penn, who has diabetic retinopathy, was

diagnosed with Type 1 diabetes in 2002 when she

was 18 and was due to receive an insulin pump but

was concerned about its accessibility. "An insulin

pump can be quite fiddly to use. It may be easier

for people who still have some sight like me to use

one independently, but I think someone who is

blind could struggle with it," she said.

at the RNIB, said: "The most important thing

you can do to prevent sight loss due to diabetic

retinopathy is to go to your retinal screening

An animated short film based on a study by Diabetes Research

and Wellness Foundation (DRWF) discusses the importance of

diabetes classification. The video details the differences between

of the young). The importance of diabetes classification and the

risk of being misdiagnosed are covered - particularly among

young people with diabetes and people from black and minority

ethnic groups (BAME). The film is based on the DRWF-funded MY

Walmart has launched the first-ever

private brand analogue insulin in the

available in Walmart pharmacies and

Customers will need a prescription

to purchase the products. ReliOn is

Walmart'private brand, with the insulin

These products will save customers

analogue insulin products - up to $101

per branded vial or $251 per package

of branded FlexPens. To find out more

Investment for Fractyl for T2D

to help further its new treatment

to minimise or eliminate the

Partners, alongside other new and

designation for a procedure - Revita

DMR - designed to resurface the

mucosa) in metabolic disease for

2 diabetes. Through the procedure,

the company aims to minimise

or eliminate the need for Type 2

immensely proud of the leadership

role Fractyl has established in

address the root cause of metabolic

disease, with an initial focus on

Type 2 diabetes. By controlling the

organ, the duodenum, we believe

to treat metabolic disease at its

source. This financing will enable

the expansion and acceleration of

with the goal of reducing insulin

dependence for patients with Type

2 diabetes on a global scale."