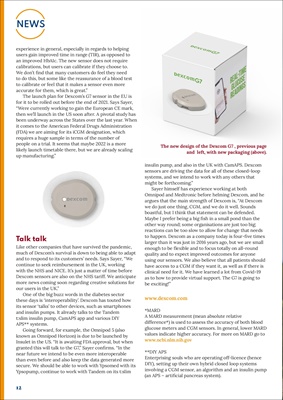 experience in general, especially in regards to helping

users gain improved time in range (TIR), as opposed to

an improved HbA1c. The new sensor does not require

calibrations, but users can calibrate if they choose to.

We don't find that many customers do feel they need

to do this, but some like the reassurance of a blood test

to calibrate or feel that it makes a sensor even more

accurate for them, which is great."

The launch plan for Dexcom's G7 sensor in the EU is

"Were currently working to gain the European CE mark,

then we'll launch in the US soon after. A pivotal study has

been underway across the States over the last year. When

it comes to the American Federal Drugs Administration

(FDA) we are aiming for its iCGM designation, which

requires a huge sample in terms of the number of

likely launch timetable there, but we are already scaling

insulin pump, and also in the UK with CamAPS. Dexcom

sensors are driving the data for all of these closed-loop

systems, and we intend to work with any others that

Sayer himself has experience working at both

Omnipod and Medtronic before helming Dexcom, and he

argues that the main strength of Dexcom is, "At Dexcom

we do just one thing, CGM, and we do it well. Sounds

boastful, but I think that statement can be defended.

other way round; some organisations are just too big;

reactions can be too slow to allow for change that needs

to happen. Dexcom as a company today is four-five times

larger than it was just in 2016 years ago, but we are small

enough to be flexible and to focus totally on all-round

quality and to expect improved outcomes for anyone

using our sensors. We also believe that all patients should

have access to a CGM if they want it, as well as if there is

clinical need for it. We have learned a lot from Covid-19

as to how to provide virtual support. The G7 is going to

difference*) is used to assess the accuracy of both blood

values indicate higher accuracy. For more on MARD go to

DIY), setting up their own hybrid closed loop systems

involving a CGM sensor, an algorithm and an insulin pump

much of Dexcom's survival is down to being able to adapt

and to respond to its customers' needs. Says Sayer, "We

continue to seek reimbursement in the UK, working

with the NHS and NICE. It's just a matter of time before

Dexcom sensors are also on the NHS tariff. We anticipate

our users in the UK."

One of the big buzz words in the diabetes sector

these days is 'interoperability'. Dexcom has touted how

its sensor 'talks' to other devices, such as smartphones

and insulin pumps. It already talks to the Tandem

known as Omnipod Horizon) is due to be launched by

Insulet in the US. "It is awaiting FDA approval, but when

granted this will talk to the G7," Sayer confirms. "In the

near future we intend to be even more interoperable

than even before and also keep the data generated more

secure. We should be able to work with Ypsomed with its

Ypsopump, continue to work with Tandem on its t:slim

The new design of the Dexcom G7 , previous page

and left, with new packaging (above).