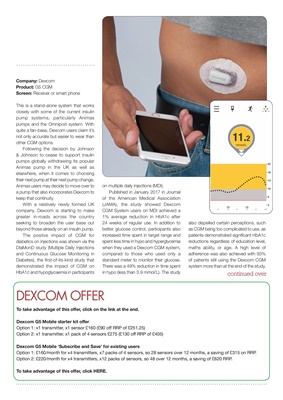 To take advantage of this offer, click on the link at the end.

Dexcom G5 Mobile 'Subscribe and Save' for existing users

This is a stand-alone system that works

closely with some of the current insulin

pumps and the Omnipod system. With

quite a fan-base, Dexcom users claim it's

not only accurate but easier to wear than

Following the decision by Johnson

& Johnson to cease to support insulin

Animas pump in the UK as well as

elsewhere, when it comes to choosing

Animas users may decide to move over to

a pump that also incorporates Dexcom to

With a relatively newly formed UK

company, Dexcom is starting to make

greater in-roads across the country

seeking to broaden the user base out

beyond those already on an insulin pump.

The positve impact of CGM for

diabetics on injections was shown via the

and Continuous Glucose Monitoring in

Diabetes), the first-of-its-kind study that

demonstrated the impact of CGM on

HbA1c and hypoglycaemia in participants

Published in January 2017 in Journal

of the American Medical Association

1% average reduction in HbA1c after

24 weeks of regular use. In addition to

when they used a Dexcom CGM system,

compared to those who used only a

standard meter to monitor their glucose.

There was a 49% reduction in time spent

as CGM being too complicated to use, as

reductions regardless of education level,

maths ability, or age. A high level of

adherence was also achieved with 93%

system more than at the end of the study.