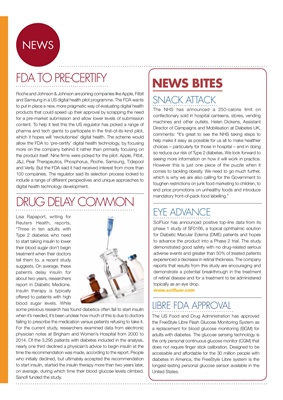 Roche and Johnson & Johnson are joining companies like Apple, Fitbit

and Samsung in a US digital health pilot programme. The FDA wants

to put in place a new, more pragmatic way of evaluating digital health

products that could speed up their approval by scrapping the need

for a pre-market submission and allow lower levels of submission

content. To help it test this the US regulator has picked a range of

pharma and tech giants to participate in the first-of-its-kind pilot,

which it hopes will 'revolutionise' digital health. The scheme would

allow the FDA to 'pre-certify' digital health technology, by focusing

more on the company behind it rather than primarily focusing on

the product itself. Nine firms were picked for the pilot: Apple, Fitbit,

and Verily. But the FDA said it had received interest from more than

100 companies. The regulator said its selection process looked to

include a range of different perspectives and unique approaches to

SciFluor has announced positive top-line data from its

to advance the product into a Phase 2 trial. The study

adverse events and greater than 50% of treated patients

experienced a decrease in retinal thickness. The company

reports that results from this study are encouraging and

demonstrate a potential breakthrough in the treatment

of retinal disease and for a treatment to be administered

topically as an eye drop.

The US Food and Drug Administration has approved

a replacement for blood glucose monitoring (BGM) for

adults with diabetes. The glucose sensing technology is

the only personal continuous glucose monitor (CGM) that

does not require finger stick calibration. Designed to be

accessible and affordable for the 30 million people with

diabetes in America, the FreeStyle Libre system is the

The NHS has announced a 250-calorie limit on

Director of Campaigns and Mobilisation at Diabetes UK,

comments: "It's great to see the NHS taking steps to

choices - particularly for those in hospital - and in doing

so reduce our risk of Type 2 diabetes. We look forward to

seeing more information on how it will work in practice.

However this is just one piece of the puzzle when it

comes to tackling obesity. We need to go much further,

which is why we are also calling for the Government to

toughen restrictions on junk food marketing to children, to

"Three in ten adults with

to start taking insulin to lower

treatment when their doctors

tell them to, a recent study

suggests. On average, these

offered to patients with high

when it's needed, it's been unclear how much of this is due to doctors

failing to prescribe the medication versus patients refusing to take it.

For the current study, researchers examined data from electronic

physician notes at Brigham and Women's Hospital from 2000 to

time the recommendation was made, according to the report. People

who initially declined, but ultimately accepted the recommendation

on average, during which time their blood glucose levels climbed.