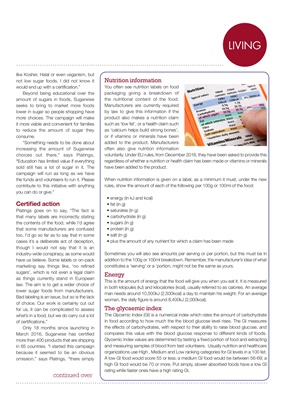 packaging giving a breakdown of

by law to give this information if the

such as "low fat", or a health claim such

or if vitamins or minerals have been

added to the product. Manufacturers

voluntarily, and under new EU rules will be required to provide this information from

December 2016, regardless of whether a nutrition or health claim has been made or

vitamins or minerals have been added to the product.

When nutrition information is given on a label, as a minimum it must, under the new

rules, show the amount of each of the following per 100g or 100ml of the food:

Sometimes you will also see amounts per serving or per portion, but this must be in

addition to the 100g or 100ml breakdown. Remember, the manufacturer's idea of what

constitutes a 'serving' or a 'portion, might not be the same as yours.

This is the amount of energy that the food will give you when you eat it. It is measured

in both kilojoules (kJ) and kilocalories (kcal), usually referred to as calories. An average

in food according to how much the the blood glucose level rises. The GI measures

the effects of carbohydrates, with respect to their ability to raise blood glucose, and

compares this value with the blood glucose response to different kinds of foods.

and measuring samples of blood from test volunteers. Usually nutrition and healthcare

organizations use High , Medium and Low ranking categories for GI levels in a 100 list.

high GI food would be 70 or more. Put simply, slower absorbed foods have a low GI

rating while faster ones have a high rating GI.

any notice of sugar. They would be familiar

with having conversations about things

not low sugar foods. I did not know it

would end up with a certification."

Beyond being educational over the

amount of sugars in foods, Sugarwise

lower in sugar so people shopping have

more choices. The campaign will make

it more viable and convenient for families

to reduce the amount of sugar they

"Something needs to be done about

increasing the amount of Sugarwise

choices out there," says Platings,

"Education has limited value if everything

sold still has a lot of sugar in it. The

campaign will run as long as we have

the funds and volunteers to run it. Please

contribute to this initiative with anything

you can do or give."

Platings adds, "The fact is that many

labels are incorrectly stating the contents

of the food, while I'd agree that some

manufacturers are confused too, I'd go

so far as to say that in some cases it's

a deliberate act of deception though I

would not say that it is not an industrywide conspiracy,

as some would have

us believe. Some labels or on-pack

sugars', which is not even a legal claim

as things currently stand in European

law. The aim is to get a wider choice of

Bad labeling is an issue, but so is the lack

of choice. Our work is certainly cut out

for us, it can be complicated to assess

what's in a food, but we do carry out a lot

Only 18 months since launching in

more than 400 products that are shipping

in 65 countries. "I started this campaign