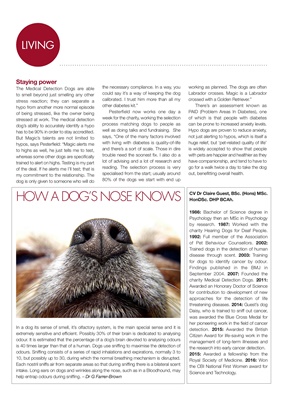 The Medical Detection Dogs are able

to smell beyond just smelling any other

stress reaction; they can separate a

hypo from another more normal episode

stressed at work. The medical detection

has to be 90% in order to stay accredited.

But Magic's talents are not limited to

to highs as well, he just tells me to test,

whereas some other dogs are specifically

trained to alert on highs. Testing is my part

of the deal. If he alerts me I'll test; that is

my commitment to the relationship. The

dog is only given to someone who will do

the necessary compliance. In a way, you

could say it's a way of keeping the dog

calibrated. I trust him more than all my

Pesterfield now works one day a

week for the charity, working the selection

process matching dogs to people as

well as doing talks and fundraising. She

says, "One of the many factors involved

with living with diabetes is quality-of-life

and there's a sort of scale. Those in dire

trouble need the soonest fix. I also do a

lot of advising and a lot of research and

reading. The selection process is very

specialised from the start; usually around

working as planned. The dogs are often

Labrador crosses. Magic is a Labrador

crossed with a Golden Retriever."

There's an assessment known as

PAID (Problem Areas In Diabetes), one

of which is that people with diabetes

can be prone to increased anxiety levels.

not just alerting to hypos, which is itself a

is widely accepted to show that people

with pets are happier and healthier as they

have companionship, and tend to have to

go for a walk twice a day to take the dog

In a dog its sense of smell, it's olfactory system, is the main special sense and it is

extremely sensitive and efficient. Possibly 30% of their brain is dedicated to analysing

odour. It is estimated that the percentage of a dog's brain devoted to analysing odours

is 40 times larger than that of a human. Dogs use sniffing to maximise the detection of

odours. Sniffing consists of a series of rapid inhalations and expirations, normally 3 to

10, but possibly up to 30, during which the normal breathing mechanism is disrupted.

intake. Long ears on dogs and wrinkles along the nose, such as in a Bloodhound, may

1986: Bachelor of Science degree in

Psychology then an MSc in Psychology

1992: Full member of the Association

Trained dogs in the detection of human

for dogs to identify cancer by odour.

Findings published in the BMJ in

Awarded an Honorary Doctor of Science

for contribution to development of new

approaches for the detection of life

Daisy, who is trained to sniff out cancer,

was awarded the Blue Cross Medal for

her pioneering work in the field of cancer

Citizen Award for life-saving work in the

management of long-term illnesses and

the research into early cancer detection.

2015: Awarded a fellowship from the