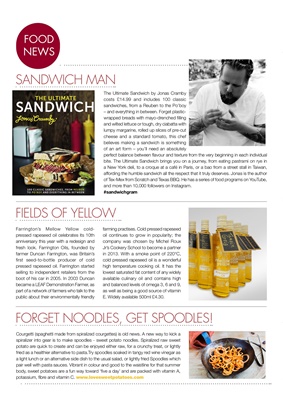 The Ultimate Sandwich by Jonas Cramby

sandwiches, from a Reuben to the Po'boy

- and everything in between. Forget plasticwrapped breads

and wilted lettuce or tough, dry ciabatta with

cheese and a standard tomato, this chef

believes making a sandwich is something

of an art form - you'll need an absolutely

bite. The Ultimate Sandwich brings you on a journey, from eating pastrami on rye in

a New York deli, to a croque at a café in Paris, or a bao from a street stall in Taiwan,

affording the humble sandwich all the respect that it truly deserves. Jonas is the author

of Tex-Mex from Scratch and Texas BBQ. He has a series of food programs on YouTube,

anniversary this year with a redesign and

selling to independent retailers from the

became a LEAF Demonstration Farmer, as

part of a network of farmers who talk to the

public about their environmentally friendly

oil continues to grow in popularity; the

company was chosen by Michel Roux

high temperature cooking oil. It has the

as well as being a good source of vitamin

Courgetti (spaghetti made from spiralized courgettes) is old news. A new way to kick a

potato are quick to create and can be enjoyed either raw, for a crunchy treat, or lightly

fried as a healthier alternative to pasta.try spoodles soaked in tangy red wine vinegar as

a light lunch or an alternative side dish to the usual salad, or lightly fried Spoodles which

pair well with pasta sauces. Vibrant in colour and good to the waistline for that summer

body, sweet potatoes are a fun way toward 'five a day' and are packed with vitamin A,