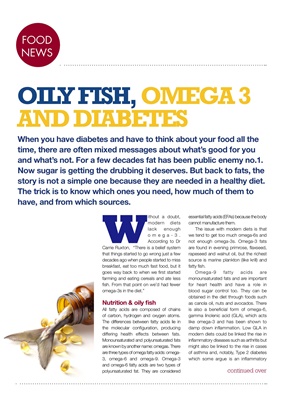 Carrie Ruxton, "There is a belief system

that things started to go wrong just a few

decades ago when people started to miss

breakfast, eat too much fast food, but it

goes way back to when we first started

fish. From that point on we'd had fewer

All fatty acids are composed of chains

of carbon, hydrogen and oxygen atoms.

The differences between fatty acids lie in

are known by another name: omegas. There

and omega-6 fatty acids are two types of

polyunsaturated fat. They are considered

time, there are often mixed messages about what's good for you

and what's not. For a few decades fat has been public enemy no.1.

Now sugar is getting the drubbing it deserves. But back to fats, the

story is not a simple one because they are needed in a healthy diet.

The trick is to know which ones you need, how much of them to

have, and from which sources.

AND DIABETESessential fatty acids (EFAs) because the body

The issue with modern diets is that

we tend to get too much omega-6s and

are found in evening primrose, flaxseed,

rapeseed and walnut oil, but the richest

monounsaturated fats and are important

for heart health and have a role in

blood sugar control too. They can be

obtained in the diet through foods such

as canola oil, nuts and avocados. There

is also a beneficial form of omega-6,

damp down inflammation. Low GLA in

modern diets could be linked the rise in

inflammatory diseases such as arthritis but

might also be linked to the rise in cases

of asthma and, notably, Type 2 diabetes

which some argue is an inflammatory