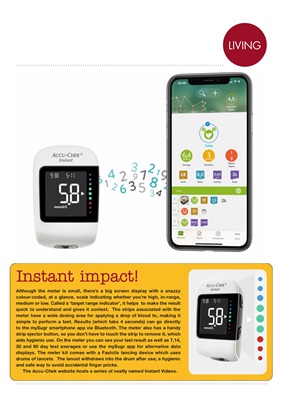 Although the meter is small, there's a big screen display with a snazzy

colour-coded, at a glance, scale indicating whether you're high, in-range,

medium or low. Called a 'target range indicator', it helps to make the result

quick to understand and gives it context. The strips associated with the

meter have a wide dosing area for applying a drop of blood to, making it

simple to perform a test. Results (which take 4 seconds) can go directly

to the mySugr smartphone app via Bluetooth. The meter also has a handy

strip ejector button, so you don't have to touch the strip to remove it, which

aids hygienic use. On the meter you can see your last result as well as 7,14,

displays. The meter kit comes with a Fastclix lancing device which uses

drums of lancets. The lancet withdraws into the drum after use; a hygienic