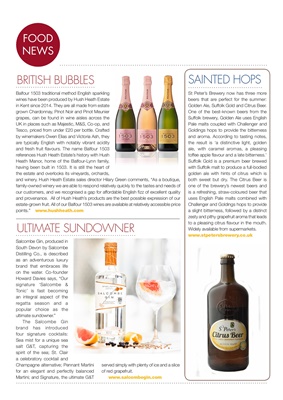 beers that are perfect for the summer:

One of the best-known beers from the

Pale malts coupled with Challenger and

Goldings hops to provide the bitterness

and aroma. According to tasting notes,

the result is 'a distinctive light, golden

ale, with caramel aromas, a pleasing

with Suffolk malt to produce a full-bodied

golden ale with hints of citrus which is

both sweet but dry. The Citrus Beer is

one of the brewery's newest beers and

is a refreshing, straw-coloured beer that

Challenger and Goldings hops to provide

a slight bitterness, followed by a distinct

to a pleasing citrus flavour in the mouth.

wines have been produced by Hush Heath Estate

in Kent since 2014. They are all made from estate

grapes, can be found in wine aisles across the

UK in places such as Majestic, M&S, Co-op, and

Tesco, priced from under £20 per bottle. Crafted

by winemakers Owen Elias and Victoria Ash, they

having been built in 1503. It is still the heart of

the estate and overlooks its vineyards, orchards,

our customers, and we recognised a gap for affordable English fizz of excellent quality

and provenance. All of Hush Heath's products are the best possible expression of our

estate-grown fruit. All of our Balfour 1503 wines are available at relatively accessible price

as an adventurous luxury

on the water. Co-founder

an integral aspect of the

regatta season and a

popular choice as the

Sea mist for a unique sea

spirit of the sea; St. Clair

a celebratory cocktail and

for an elegant and perfectly balanced

Martini; and Signature, the ultimate G&T

served simply with plenty of ice and a slice