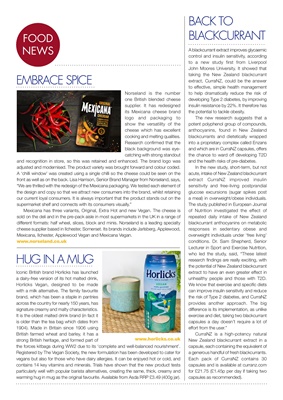 Norseland is the number

supplier. It has redesigned

logo and packaging to

show the versatility of the

cheese which has excellent

Research confirmed that the

black background was eyecatching with strong

and recognition in store, so this was retained and enhanced. The brand logo was

adjusted and modernised. The product variety was brought forward and colour coded.

front as well as on the back. Lisa Harrison, Senior Brand Manager from Norseland, says,

"We are thrilled with the redesign of the Mexicana packaging. We tested each element of

the design and copy so that we attract new consumers into the brand, whilst retaining

our current loyal consumers. It is always important that the product stands out on the

supermarket shelf and connects with its consumers visually."

Mexicana has three variants, Original, Extra Hot and new Vegan. The cheese is

different formats: half wheel, slices, block and minis. Norseland is a leading specialty

cheese supplier based in Ilchester, Somerset. Its brands include Jarlsberg, Applewood,

HUG IN A MUG

a dairy-free version of its hot malted drink,

Horlicks Vegan, designed to be made

with a milk alternative. The family favourite

brand, which has been a staple in pantries

across the country for nearly 150 years, has

It is the oldest malted drink brand (in fact it

is older than the tea bag which dates from

British farmed wheat and barley, it has a

the forces kitbags during WW2 due to its 'complete and well-balanced nourishment'.

Registered by The Vegan Society, the new formulation has been developed to cater for

vegans but also for those who have dairy allergies. It can be enjoyed hot or cold, and

contains 14 key vitamins and minerals. Trials have shown that the new product tests

control and insulin sensitivity, according

to a new study first from Liverpool

John Moores University. It showed that

extract, CurraNZ, could be the answer

to help dramatically reduce the risk of

insulin resistance by 22%. It therefore has

the potential to tackle obesity.

The new research suggests that a

into a proprietary complex called Enzans

and which are in CurraNZ capsules, offers

the chance to ward off developing T2D

and the health risks of pre-diabetes.

In the new study, short-term, but not

a meal) in overweight/obese individuals.

The study published in European Journal

of Nutrition investigated the effect of

responses in sedentary obese and

Lecturer in Sport and Exercise Nutrition,

who led the study, said, "These latest

research findings are really exciting, with

the potential of New Zealand blackcurrant

extract to have an even greater effect in

unhealthy people and those with T2D.

We know that exercise and specific diets

can improve insulin sensitivity and reduce

the risk of Type 2 diabetes, and CurraNZ

provides another approach. The big

difference is its implementation, as unlike

capsules a day doesn't require a lot of

effort from the user."

CurraNZ is a high-potency natural

New Zealand blackcurrant extract in a

capsule, each containing the equivalent of

a generous handful of fresh blackcurrants.

Each pack of CurraNZ contains 30

capsules and is available at curranz.com