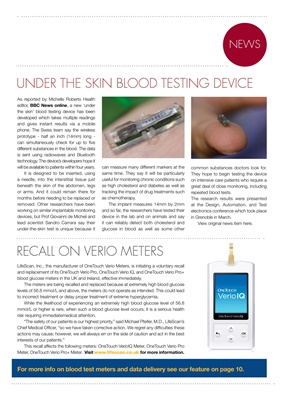 uNder tHe skIN BlOOd testINg devICe

as reported by michelle roberts health

the skin’ blood testing device has been

and gives instant results via a mobile

can simultaneously check for up to five

different substances in the blood. the data

is sent using radiowaves and bluetooth

technology. the device’s developers hope it

will be available to patients within four years. can measure many different markers at the common substances doctors look for.

it is designed to be inserted, using same time. they say it will be particularly they hope to begin testing the device

a needle, into the interstitial tissue just useful for monitoring chronic conditions such on intensive care patients who require a

beneath the skin of the abdomen, legs as high cholesterol and diabetes as well as great deal of close monitoring, including

or arms. and it could remain there for tracking the impact of drug treatments such repeated blood tests.

months before needing to be replaced or as chemotherapy. the research results were presented

removed. other researchers have been the implant measures 14mm by 2mm at the Design, automation, and test

working on similar implantable monitoring and so far, the researchers have tested their electronics conference which took place

devices, but Prof giovanni de micheli and device in the lab and on animals and say in grenoble in march.

Lifescan, inc., the manufacturer of onetouch Verio meters, is initiating a voluntary recall

blood glucose meters in the uk and ireland, effective immediately.

levels of 56.8 mmol/L and above, the meters do not operate as intended. this could lead

to incorrect treatment or delay proper treatment of extreme hyperglycemia.

While the likelihood of experiencing an extremely high blood glucose level of 56.8

mmol/L or higher is rare, when such a blood glucose level occurs, it is a serious health

“the safety of our patients is our highest priority,” said michael Pfeifer, m.D., Lifescan’s

Chief Medical Officer, “so we have taken corrective action. We regret any difficulties these

actions may cause; however, we will always err on the side of caution and act in the best

interests of our patients.”

For more info on blood test meters and data delivery see our feature on page 10.