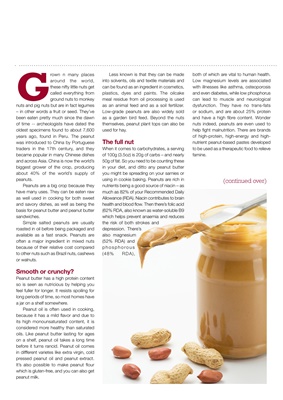 rown n many places Less known is that they can be made both of which are vital to human health.

around the world, into solvents, oils and textile materials and Low magnesium levels are associated

these nifty little nuts get can be found as an ingredient in cosmetics, with illnesses like asthma, osteoporosis

called everything from plastics, dyes and paints. the oilcake and even diabetes, while low phosphorus

nuts and pig nuts but are in fact legumes as an animal feed and as a soil fertilizer. dysfunction. they have no trans-fats

– in other words a fruit or seed. they’ve Low-grade peanuts are also widely sold or sodium, and are about 25% protein

been eaten pretty much since the dawn as a garden bird feed. beyond the nuts and have a high fibre content. Wonder

of time -- archeologists have dated the themselves, peanut plant tops can also be nuts indeed, peanuts are even used to

oldest specimens found to about 7,600 used for hay. help fight malnutrition. There are brands

years ago, found in Peru. the peanut of high-protein, high-energy and high-

traders in the 17th century, and they When it comes to carbohydrates, a serving to be used as a therapeutic food to relieve

and across asia. china is now the world’s 50g of fat. so you need to be counting these

biggest grower of the crop, producing in your diet, and ditto any peanut butter

peanuts. using in cookie baking. Peanuts are rich in (continued over)

have many uses. they can be eaten raw much as 82% of your recommended Daily

as well used in cooking for both sweet allowance (rDa). niacin contributes to brain

and savory dishes, as well as being the health and blood flow. Then there’s folic acid

simple salted peanuts are usually the risk of both strokes and

roasted in oil before being packaged and depression. there’s

available as a fast snack. Peanuts are also magnesium

often a major ingredient in mixed nuts (52% rDa) and

because of their relative cost compared phosphorous

so is seen as nutricious by helping you

feel fuller for longer. it resists spoiling for

long periods of time, so most homes have

a jar on a shelf somewhere.

because it has a mild flavor and due to

on a shelf, peanut oil takes a long time

which is gluten-free, and you can also get