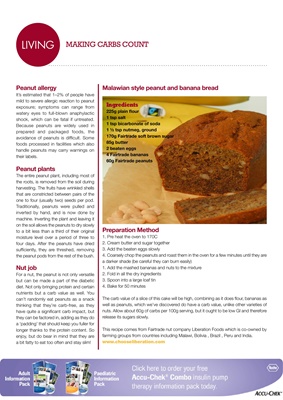 it’s estimated that 1–2% of people have

exposure; symptoms can range from ingredients

shock, which can be fatal if untreated. 1 tsp salt

because peanuts are widely used in 1 tsp bicarbonate of soda

the entire peanut plant, including most of

the roots, is removed from the soil during

harvesting. the fruits have wrinkled shells

that are constricted between pairs of the

one to four (usually two) seeds per pod.

traditionally, peanuts were pulled and

inverted by hand, and is now done by

machine. inverting the plant and leaving it

on the soil allows the peanuts to dry slowly

moisture level over a period of three to 1. Pre heat the oven to 170c

four days. after the peanuts have dried 2. cream butter and sugar together

sufficiently, they are threshed, removing 3. add the beaten eggs slowly

the peanut pods from the rest of the bush. 4. coarsely chop the peanuts and roast them in the oven for a few minutes until they are

a darker shade (be careful they can burn easily)

Nut job 1. add the mashed bananas and nuts to the mixture

for a nut, the peanut is not only versatile 2. fold in all the dry ingredients

but can be made a part of the diabetic 3. spoon into a large loaf tin

diet. not only bringing protein and certain 4. bake for 50 minutes

nutrients but a carb value as well. you

can’t randomly eat peanuts as a snack The carb value of a slice of this cake will be high, combining as it does flour, bananas as

thinking that they’re carb-free, as they well as peanuts, which we’ve discovered do have a carb value, unlike other varieties of

have quite a significant carb impact, but nuts. allow about 60g of carbs per 100g serving, but it ought to be low gi and therefore

they can be factored in, adding as they do release its sugars slowly.

a ‘padding’ that should keep you fuller for

longer thanks to the protein content. so this recipe comes from fairtrade nut company Liberation foods which is co-owned by

enjoy, but do bear in mind that they are farming groups from countries including malawi, bolivia , brazil , Peru and india.

a bit fatty to eat too often and stay slim! www.chooseliberation.com