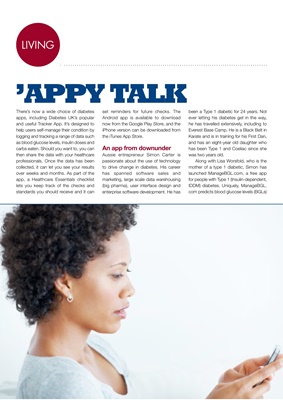 there’s now a wide choice of diabetes set reminders for future checks. the been a type 1 diabetic for 24 years. not

apps, including Diabetes uk’s popular android app is available to download ever letting his diabetes get in the way,

and useful tracker app. it’s designed to now from the google Play store, and the he has travelled extensively, including to

help users self-manage their condition by iPhone version can be downloaded from everest base camp. he is a black belt in

logging and tracking a range of data such the itunes app store. karate and is in training for his first Dan,

as blood glucose levels, insulin doses and and has an eight-year old daughter who

carbs eaten. should you want to, you can An app from downunder has been type 1 and coeliac since she

then share the data with your healthcare aussie entrepreneur simon carter is was two years old.

professionals. once the data has been passionate about the use of technology along with Lisa Worsfold, who is the

collected, it can let you see your results to drive change in diabetes. his career mother of a type 1 diabetic, simon has

over weeks and months. as part of the has spanned software sales and launched managebgL.com, a free app

standards you should receive and it can enterprise software development. he has com predicts blood glucose levels (bgLs)