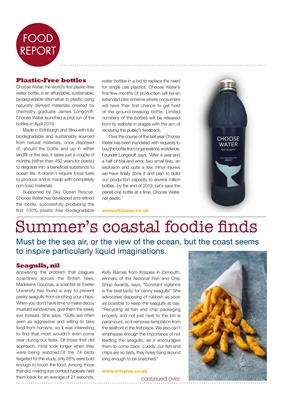 into compost or liquid fertilizer, depending

on local processing facilities. This is in

and plastic capsules which can take

hundreds of years to degrade in landfill,

with a predicted 52 billion non-recyclable

globally by the end of 2020, despite the

world waking up to the plastic crisis.

the highest quality speciality coffee over

"This ensures our customers get the

earn greater income to re-invest into

their livelihoods to ensure their families,

workers and local communities can thrive

long into the future."

Awarded a 'Best Buy' accolade in

May's edition of Which? Magazine, Blue

grown as 'garden coffee' in small lots in

the world's most famous coffee growing

regions. The birthplace of coffee itself,

Ethiopia produces some of the highest

quality and most prized Arabica coffees in

the world, and this coffee is no exception,

with bright, sweet aromatics and

water bottle, is an affordable, sustainable,

Choose Water launched a pilot run of the

Made in Edinburgh and filled with fully

from natural materials, once disposed

of, should the bottle end up in either

landfill or the sea, it takes just a couple of

months (rather than 450 years for plastic)

to degrade into a beneficial substance to

to produce and is made with completely

Choose Water has developed and refined

the bottle, successfully producing the

water bottles in a bid to replace the need

for single use plastics. Choose Water's

first few months of production will be an

will have their first chance to get hold

of the ground-breaking bottle. Limited

numbers of the bottles will be released

from its website in stages with the aim of

Over the course of the last year Choose

Water has been inundated with requests to

buy the bottle from organisations worldwide.

Founder Longcroft says, "After a year and

a half of trial and error, two small fires, an

explosion and quite a few minor injuries we

have finally done it! to several million bottles

planet one bottle at a time. Choose Water,

Answering the problem that plagues coastlines across the British

Isles, Madeleine Goumas, a scientist at Exeter University has

found a way to prevent pesky seagulls from pinching your chips.

When you don't have time to make decoy mustard sandwiches,

give them the steely eye instead. She says, "Gulls are often seen

as aggressive and willing to take food from humans, so it was

interesting to find that most wouldn't even come near during our

tests. Of those that did approach, most took longer when they

were being watched.Of the 74 birds targeted for the study, only

26% were bold enough to touch the food. Among those that did,

seconds. Kelly Barnes from Krispies in Exmouth, winners of the

Must be the sea air, or the view of the ocean, but the coast seems

is the best tactic for canny seagulls!"

She advocates disposing of rubbish

as soon as possible to keep the

seagulls at bay. "Recycling all fish

and chip packaging properly and

not just next to the bin is paramount,

so it removes temptation from

the seafront in the first place. We

also can't emphasise enough the importance of not feeding the

seagulls, as it encourages them to come back. Luckily, our fish

and chips are so tasty, they rarely hang around long enough to be