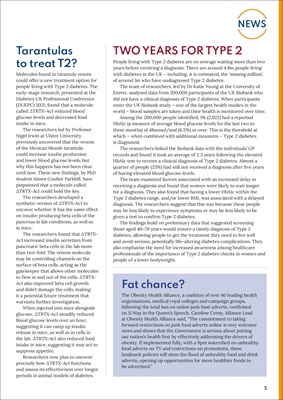 could offer a new treatment option for

people living with Type 2 diabetes. The

early-stage research, presented at the

The researchers led by Professor

previously uncovered that the venom

of the Mexican blonde tarantula

and lower blood glucose levels, but

why this happens has not been clear

until now. These new findings, by PhD

pinpointed that a molecule called

ΔTRTX-Ac1 could hold the key.

The researchers developed a

synthetic version of ΔTRTX-Ac1 to

uncover whether it has the same effect

on insulin-producing beta cells of the

pancreas in lab conditions, as well as

The researchers found that ΔTRTXAc1 increased

than two-fold. The venom molecule

may be controlling channels on the

surface of beta cells, acting as the

gatekeeper that allows other molecules

to flow in and out of the cells. ΔTRTXAc1 also improved

and didn't damage the cells, making

it a potential future treatment that

When injected into mice alongside

blood glucose levels over an hour,

suggesting it can ramp up insulin

release in mice, as well as in cells in

intake in mice, suggesting it may act to

and assess its effectiveness over longer

periods in animal models of diabetes.

years before receiving a diagnosis. There are around 4.8m people living

with diabetes in the UK - including, it is estimated, the 'missing million',

of around 1m who have undiagnosed Type 2 diabetes.

The team of researchers, led by Dr Katie Young at the University of

Exeter, analysed data from 200,000 participants of the UK Biobank who

did not have a clinical diagnosis of Type 2 diabetes. When participants

world - blood samples are taken and their health is monitored over time.

which - when combined with additional measures - Type 2 diabetes

The researchers linked the Biobank data with the individuals' GP

records and found it took an average of 2.3 years following the elevated

HbA1c test to receive a clinical diagnosis of Type 2 diabetes. Almost a

of having elevated blood glucose levels.

The team examined factors associated with an increased delay in

for a diagnosis. They also found that having a lower HbA1c within the

Type 2 diabetes range, and/or lower BMI, was associated with a delayed

diagnosis. The researchers suggest that this was because these people

given a test to confirm Type 2 diabetes.

The findings build on preliminary data that suggested screening

diabetes, allowing people to get the treatment they need to live well

also emphasise the need for increased awareness among healthcare

people of a lower bodyweight.

The Obesity Health Alliance, a coalition of over 40 leading health

on 11 May in the Queen's Speech. Caroline Cerny, Alliance Lead

at Obesity Health Alliance said, "The commitment to taking

news and shows that the Government is serious about putting

our nation's health first by effectively addressing the drivers of

obesity. If implemented fully, with a 9pm watershed on unhealthy

food adverts on TV and restrictions on promotions, these

landmark policies will stem the flood of unhealthy food and drink

adverts, opening up opportunities for more healthier foods to